When golf fans turned on their televisions or opened their streams on Saturday, they were welcomed back to The Open Championship with a welcome sight.  Tiger Woods, still working on his comeback after several years on Tour shortened or erased by injuries, was making his charge on Moving Day.

At one point in his round, Tiger got to -6 to enter a crowded tie for the championship’s lead.  He gave a stroke back, and some of those leaders picked up a few.  At -5, Woods is four strokes back of the three co-leaders in Xander Schauffele, Kevin Kisner, and defending champion Jordan Spieth.  With a particularly windy day on the way, even by Open Championship standards, four shots is not an insurmountable gap.

Tiger’s -5 set the stage for a Moving Day Saturday where many of pro golf’s absolute best made some real noise on Carnoustie’s usually punishing fairways and greens.  Defending champion Jordan Spieth carded a 65 to get to -9 for the tournament.  Spieth was brilliant, coming out of his recent putting struggles before the world’s eyes as he started by driving the green on 1 and making his eagle putt.  He was bogey-free, and more to the point, he put together the kind of round that just about nobody could put together when Tiger Woods was Tiger Woods.

More than anybody else on Tour, Spieth represents how far golf has come since Woods was dominant.  Should he win on Sunday, the 24 year-old would have his second Claret Jug and his fourth major championship already.  The level he plays at—and Spieth is not alone in professional golf in this regard—is reminiscent of the level Tiger was on in 2006.

It has been twelve years since Tiger Woods has won this particular event.  For 24 year-olds Jordan Spieth and Xander Schauffele, that was half a lifetime ago, when they were still in middle school.  Veteran Kevin Kisner, who joins those two at -9 atop the leaderboard, was just turning pro.  The only other person really close to contention right now who played that 2006 Open Championship was Adam Scott.  Everybody else either missed the cut or the event entirely.

The field that’s left now is mostly comprised of golfers who grew up watching Tiger Woods in Tiger’s true prime.  He was the example that left everybody else with an option:  Follow his lead or try a different game.

In Woods’ prime, he had a number of advantages over the field simply by being the first to try certain things.  He spent down time cross-training and lifting weights, giving him a level of strength and endurance that was unmatched on Tour.  Now he’s in his forties.  Now he’s coming off multiple surgeries.  Now he’s playing against people who were in middle school when he last won this tournament, and the entire professional golf world has embraced the value of some time in the gym.

Tiger can’t outhit the field anymore.  Blame modern equipment, knee surgeries, call the ball juiced, but the days of Mr. Woods putting the ball deeper down the fairway than anybody else are gone now.  In this very real sense, Tiger Woods is playing golf against a field that is shaped in his own image, and for somebody who has reached the levels he reached there can be no tougher opponent than versions of himself.

Schauffele is also 24, the same age as Spieth.  He had a bit of a breakout year in 2017, staying in the periphery during the majors while winning two tournaments as a rookie, the first golfer in six years to accomplish that feat.

Xander Schauffele is another lingering product of the Tiger Effect.  This generation of golfers who grew up in the world that Tiger had changed is coming of age and showing just how closely they can all follow his example.

This is not just a generation of golfers whose games were impacted by a singular great.  Keep in mind that they grew up in a world where the most famous single athlete in the world, the name known by the most people, was an American man who played a game called golf.  Tiger Woods never starred in a movie alongside Bugs Bunny, but his presence in the sporting world is very Michael Jordanesque.

Their world, then, is unique to golf.  While many associate the “Tiger Boom” with Woods’ early career, many of the people he brought to golf back then are still lovers of the game today.

Another difference in today’s circuit, compared to the golf world that Woods had been used to, is that today’s is a Tour of friends.

Spieth in particular seems to be a golfer’s golfer.  This week for the Open Championship, he is staying in a hose alongside a number of other pros including one of his co-leaders in Kevin Kisner.

This is something impossible to picture in Tiger’s prime.  Tiger Woods and Phil Mickelson could barely share a sport, let alone a house in Scotland.  Tiger has had friends on the circuit, including some old Stanford buddies, but he was never outwardly close with them the way that Spieth and the generation around him have been.

Camaraderie like that might be the best thing about this generation of young golfers.  For the majority, golf is a game played among friends.  Golf is Sunday morning foursomes, regular leagues, or squeezing out nine holes with a good friend before the sun goes down in the summertime.  It would be difficult to find a golfer, no matter how much a novice, that would not be able to identify with the friendly mentality.

There is a fair chance that Sunday’s round will be chaotic, with the winds ready to once again make the oldest of the major championships a battle of man against the elements.

After what seemed like a change in season between the dry and still Thursday conditions, the rainy Friday course, and the ideal scoring climate on Saturday, a blustery finish at the northernmost course in the Open Championship rotation would be only appropriate.  It will make the ball lively, and give both golfer and viewer a new angle on Carnoustie.

The weather means that, more than even usual, anything can happen on Sunday.  Simply holding to even par might make up several strokes on the field, as everybody else struggles in the elements.  It will be a battle of knockdown shots, generous rolls, smart plays, and long putting.  With Tiger in the mix and Spieth sharing the top position, the sports fan could not have asked for much more coming into the final round of the Open Championship. 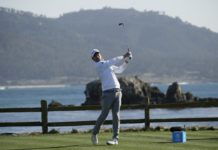 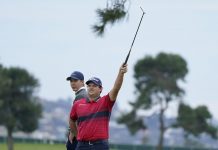