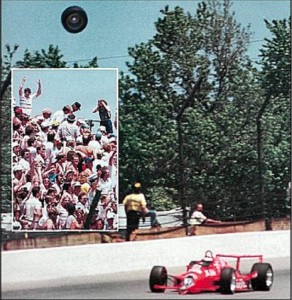 I don’t know much about basketball, but I did see a guy make a full court shot once.

Unfortunately, that will probably be the closest I will ever come to participating in the arena of major sporting history. It seems nearly everyone has some great sports moment to recall with the countless hours of reminiscing I see on social media. But for me, all I have is a basketball hoop that hung near our garage as a kid.

Once in a great while I still take a drive past my old house, and the last time I checked the rotted backboard still remained a fixture as it has since my father spent an entire day swearing it up over 20 years ago.

Our driveway, and the road in front of it, was prime real estate for a basketball court. We lived on the crest of a large hill, so the surface from the road to the hoop was perfectly level. You could back up completely across the street into the neighbor’s front yard and overhand the ball as far as your childhood arms would allow you to chuck it.

There were of course plenty of epic battles of H.O.R.S.E in addition to the long ball played on this surface, but for the most part my brother and I could most often be found standing in the middle of the street and power arcing that orange sphere hundreds of feet skyward in an effort to finally make the world’s longest and most incredible shot possible. Yet, trumping all these fond memories of heated sibling competition, that basketball hoop still reminds me of only one thing: my neighbor Lyle Kurtenbach.

Our family had always lived across the street from Lyle Kurtenbach. Lyle and his wife Karen, along with their daughter Dawn resided in the house that stood as a permanent fixture as you gazed out the large bay window that adorned the front of our homestead. The Kurtenbach family always had a remarkably well kept home, maintained for the most part by Lyle who also re-defined what it meant to be a ‘lawn guy’.

Lyle’s lawn was always perfect. Seriously, there was never a weed in the thing. He would attend to that lawn like a surgeon to a patient. He was absolutely relentless. That as it is, what still stands out the most to me, was the whole Don Johnson mustache thing that the man had going on at the same time. With his combination of khaki shorts, printed short-sleeved button-ups, sandals, and a classic eighties ‘stache, watching Lyle was pretty close to what it would be like watching Magnum P.I. mow his lawn. As a kid the whole spectacle was absolutely fascinating.

Both my brother and I thought Lyle was beyond cool. He was hardcore into Indy car racing; and as a young man interested in everything that went zoom, Lyle for the most part topped the chart in the “that guy is pretty awesome” category. He would occasionally stop over and talk to us on the weekends for a minute or two and inevitably end up joining the game. Although he never said anything, I think he enjoyed heaving that basketball half a mile almost as much as we did.

This occasional tradition continued over the years as I slowly grew up with Lyle and his family through these brief exchanges on the blacktop. Sometimes you pass through life with your neighbors in blocks of one-minute conversations. We maintained our lives with Lyle in one-handed shots.

I guess there was nothing special about that Friday in late May of 1987. My brother and I were outside after school, unenthusiastically tossing up the basketball as we awaited a much dreaded five hour drive to our grandparent’s house for the Memorial Day weekend. Lyle, who had been out in his yard as usual, happened to take a traditional brief moment to walk across the street and say hello. The three of us stood in the middle of the road talking about our respective weekends as we took turns hurling the basketball the nearly forty yards to the garage.

I do remember being insanely jealous. Already upset to be traveling to visit the elders, the salt in the wound came when we heard the smartly dressed Kurtenbach inform of us of his departure that evening to take in the Indy 500 live and in person that Sunday. We listened to his stories of the famed race and were emotionally crushed at each twist and turn as Lyle told tales of what our idols on the electric racetrack actually went through as they screamed around the breathing black beast at neck breaking speeds.

I was listening to his tales with such undivided attention that I nearly missed the entire thing.

Somewhere between the rumble of engines, and the smell of gasoline, we still had been flinging the basketball almost as an afterthought. I don’t know why I watched that particular lob, but in mid sentence Lyle had chucked one towards the hoop, in fact, right at the hoop.

You always hear people talk about things happening in slow motion, and this was no different. You somehow knew right away, but you had to wait and watch it.

The ball never wavered in its path.

It flew like it was on a rope landing with a thunk on the square and loud, hard clank off the inside rim to the ground.

My brother and I were speechless. Yet for Lyle, the moment seemed pretty mundane. Although he had a slightly shocked look on his face, he simply muttered something about luck and proceeded to call it a night while leaving us to traipse back to the house, our shoes thoroughly soaked with the drool that had just poured out of the mouths connected to our chins that were sitting solidly on our chest.

I personally didn’t let the subject rest the entire weekend. The minute we got home that Monday night, my brother and I immediately attempted to repeat the feat for the rest of the evening. We had hoped to run into Lyle and resume Friday’s conversation, but shortly after dark we gave in to the fact we would just have wait another day.

The Kurtenbach family had made it to their annual outing at the Indy 500. Lyle was enjoying the race between his wife and daughter at the top of the grandstand when Tony Bettenhausen’s race car lost a wheel in turn 3, and Roberto Guerrero hit it head-on at full speed with the nose cone of his machine.

The loose wheel was thrown over the safety fence and struck Lyle in the head, killing him instantly. He was the first spectator killed at the race since 1960, and as of this moment is the last one as well. The race itself was nearly accident free.

Needless to say, things were never the same in the neighborhood after that day. The lights at the Kurtenbach residence would never shine as they had before. There would be no more half court shots, no conversations, and as the house eventually emptied, the lawn repainted itself from green to brown.

I would never be the same either.

This would be the first time I would actually experience death and fully understand how the unknown always has a hand in your business.

This would be the first time I knew what it felt like to bring a casserole across the street as the sadness fully and truly manifested itself in front of me.

This was the first time I realized that life was so fragile.

One day you find yourself shooting hoops with a guy that seems invincible, and the next day he can simply be gone. It was the harsh reality that even a fifteen-year-old boy understood.

It was a lesson we all learn, but still, even right at this moment, remains a painful one for me at best.

There are many old basketball hoops, on many homes, in many a neighborhood, in many a city.

Mine reminds me of Lyle Kurtenbach, and I hope he somehow knows that.