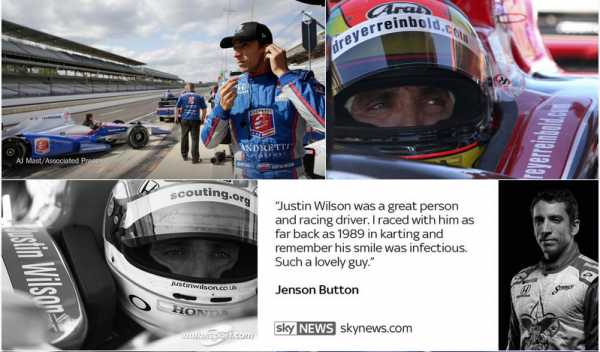 IndyCar mourns the loss of driver Justin Wilson who suffered a head injury during the ABC Supply 500 at Pocono Speedway on Sunday and passed away on Monday.

Wilson was struck in the head by a piece of debris as Sage Karam — who was leading the race at the time — lost control of his car and spun into the wall. It appears as though Wilson was knocked unconscious as his car lost speed, veered toward the infield and struck a retaining wall.

The tragedy comes on the heels of the death of Dan Wheldon, who was killed in Las Vegas in 2011.

Wilson, a 37-year-old native of Sheffield, England, leaves behind a wife and two young daughters aged 5 and 7.

The evolution of auto racing’s safety protocols created a safer working environment for drivers overall. As an example, Formula One driver Jules Bianchi, who spent a year in a coma after crashing into a parked car at the 2014 Japanese Grand Prix, became the first F1 driver to pass away since Ayrton Senna in 1994.

Senna, who many hail as the greatest race car driver in history, suffered a fate similar to Wilson when he crashed into a wall and was struck in the head by the wheel of his car.

The IndyCar Series has been slightly less safe than Formula One over the years, much of it due to a difference in race courses. Unlike Formula One which competes on road and street courses, IndyCar competes on a variety of circuits including road and street circuits, small and modified ovals and super-speedways. IndyCars will often travel over 200 mph on ovals.

Prior to Wheldon’s tradegy, IndyCar lost Paul Dana at the 2006 Toyota Indy 300 in Miami and Tony Renna during an Indy test in 2003.

As they should, Indy Car will likely review ways to protect drivers in their open-cockpit cars. With their carbon-fiber monocoque chassis, driver’s are more protected than ever before, but Wilson’s death reminds us that auto racing remains a life-and-death occupation.

“These cars are inherently dangerous with the open cockpit like that, head exposed,” Ryan Hunter-Reay said. Maybe in the future we can work towards some type of…canopy, not a full jet fighter canopy, but something that can give us a little protection but keep the tradition of the sport.” Indy Car will likely review ways to protect drivers — Toronto Globe and Mail