If Memorial Day Weekend is coming, that means that the Indy 500 is coming as well.  Sunday’s race is still an iconic American race every year, regardless of shifts and changes in the racing landscape.

Among the Indy 500’s traditions, there is an open question about whether the Andretti Family, the most famous name in auto racing, can win the big race at the Brickyard.  To that end, Marco Andretti joined our own Jim Williams for an interview about the upcoming race, his family, and their fantastic history on the track.  Jim asks Marco about his family’s extensive history in racing, and their unfortunate history at Indianapolis.  With all the narratives around the Andrettis, what is Marco’s take on the big race?

Andretti has been on the Indy circuit since 2006, but of course his family has had a much longer history in racing.  His father, Michael Andretti, was one of the stars of his era in IndyCar racing, and of course his grandfather Mario is one of the biggest names in any auto racing circuit.  Does Marco consider those big shoes to fill, or is he eager to continue a family tradition?  After twelve years on the circuit, he has established himself as a mainstay.

The Andrettis have not won an Indianapolis 500 since 1969, care of patriarch Mario’s big win that year.  Michael seemed utterly snakebitten at the famous track, coming as close as anyone can come without winning the race over his many runnings.  Now it’s up to Marco to break his family’s “curse” and enter the winner’s circle at Indianapolis Motor Speedway.  Andretti’s last race was right here in Tampa Bay, having run the St. Petersburg Grand Prix in March.

The Indianapolis 500 takes place on Sunday afternoon, May 27.  Sports Talk 1040 Tampa Bay is the Bay Area’s home for the big race, with coverage starting at noon. 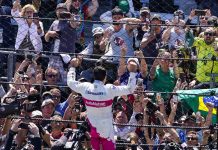 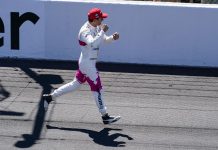