Memorial Day Weekend is upon us, and that means the Indianapolis 500 is just a couple of days away now.  The crown jewel of IndyCar takes place Sunday, and St. Petersburg’s own Sebastien Bourdais is among the favorites.

Bourdais won the Firestone Grand Prix of St. Petersburg for the second straight year this past March, and he likes the town so much he calls St. Pete home these days.  Auto racing is in his blood, as Sebastien Bourdais is originally from Le Mans, France, home of one of the most famous car races in the world.  Sports Talk Florida’s Jim Williams continues his preview of the big race with an interview of Bourdais about his career and the upcoming race.

Sebastien Bourdais will start in Row Two at Indianapolis Motor Speedway on Sunday, the site of an injury he sustained during a qualifying lap in 2017 after an accident.  His best finish in the race was a 7th place in 2014, but he has finished fourth twice at the Grand Prix of Indianapolis, so he has been successful in Indianapolis in the past.

The 102nd running of the Indianapolis 500 will air on Sports Talk 1040 AM Tampa Bay on Sunday afternoon, with coverage starting at noon. 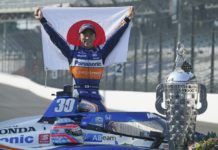 No Monaco, no Indy 500, so NASCAR has the biggest day in auto racing all to itself. 6 pm on FOX