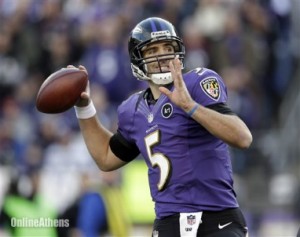 ENGLEWOOD, Colo. — A large photo of an NFL player has not generated this much buzz in the Mile High region since fans who wanted Tim Tebow to be the Denver Broncos’ starting quarterback purchased some billboard space in 2010.

The NFL’s marketing campaign for next Thursday night’s “Kickoff” game has featured several large banners of Baltimore Ravens quarterback Joe Flacco, including one at Sports Authority Field at Mile High that has prompted an angry public reaction from Broncos fans.

The Super Bowl champion Ravens play the Broncos in Denver next Thursday in the NFL’s regular-season opener. The Flacco banner, which is several stories tall, is hanging alongside a banner of Broncos quarterback Peyton Manning, who questioned the placement of the banner during a recent radio interview.

For more on this story visit: ESPN.com