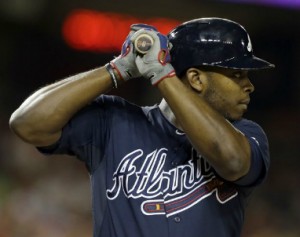 According to Mark Bowman of MLB.com, Justin Upton was diagnosed with a left hand contusion after he was hit by a pitch by the Indians’ Ubaldo Jimenez earlier this evening. He is considered day-to-day.

Upton was hit by the pitch in the bottom of the fifth inning. It appeared that he would stay in the game initially, as he began to walk over to first base after being examined by a team trainer, but the Braves understandably didn’t want to take any chances.

For more on this story visit: D.J. Short, NBC Sports