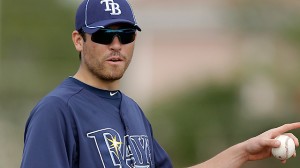 Matt Moore worked 6 strong innings allowing just 1R/ER on 3 hits while striking out 9 and walking only 1. He was given all the support he needed as the Rays offense pounded out 19 hits en route to defeating the Chicago White Sox 10-4.  The victory improves the Rays record to 11-13 and the White Sox fall to 10-13.

With the victory Matt Moore‘s record improves to 5-0 with a league leading ERA of 1.13. With 5 victories in April he puts his name into the Rays record book for wins in the month of April and ties him for the most victories in any month with David Price (June 2012) and Scott Kazmir (May 2008).  The White Sox scored their only run against Moore on a solo homer off the bat of Adam Dunn making all 4 runs scored against Moore in 2013 the result of home runs.

Entering the game the Rays had a team batting average of .229 which was on pace to set the franchise record for the month of March/April of .231 set in April of 2001.  They should be able to avoid that mark after getting 19 hits Saturday night including home runs by Ben Zobrist (2nd) and Desmond Jennings (3rd).   Ben Zobrist, Evan Longoria, James Loney, Kelly Johnson, and Sam Fuld all had multi-hit games led by Johnson and Longoria with 4 hits apiece. The Rays have now homered in 13 straight games which is 2 shy of the team record 15 games set from July 25, 2009 through August 10, 2009.

The Rays bullpen was not particularly sharp causing an easy victory to remain contentious through the later innings.  They allowed 3R/ER on 6 hits, 4 walks, and a balk. Although Jake McGee work a scoreless 7th striking out the side he did allow  2-hits and a walk and had to get out of a bases loaded jam. Kyle Farnsworth began the 8th inning but after issuing two walks, committing a balk, and giving up 3 hits while only retiring 1 batter he was removed with the bases loaded. Joel Peralta came in and struck out Tyler Flowers for the second out before walking Jordan Danks to force home a run, and struck out Alejandro De Aza to end the inning. Cesar Ramos worked a scoreless ninth allowing 1 hit.