1. Conor McGregor to Return to the Octagon

The UFC’s biggest star was a little naughty in 2017, leaving the sport of mixed-martial arts to go box Floyd Mayweather for a huge payday. You can’t blame him, leaving a sport where he makes between $10 million-$15 million a fight to go make upwards of $100 million. McGregor and UFC President Dana White agreed this was a one-time thing and then he would return to the octagon. The Mayweather-McGregor fight was in August, and the lightweight champion does not have a set date or opponent on when he’ll fight next.

The most logical fight would be with interim-lightweight champion Tony Ferguson. But rumors have circulated involving another boxing fight with Manny Pacquiao and/or Paulie Malignaggi. Both those fights would produce huge paydays for McGregor. Even though the Ferguson fight is the one that makes the most sense, the UFC can’t pay McGregor nearly what he would make if he were to box another one of the sport’s superstars.

The UFC needs their biggest star back in the octagon. UFC 219, 220, 221 all have main events already announced, so the earliest it looks like we would see McGregor back is March 3rd, which takes place at the T-Mobile Arena in Las Vegas.

2.  A Short Suspension For Jon Jones

When Jon Jones got suspended in July 2016 for testing positive for two banned controlled substances, he was suspended for one year. He then tested positive for a banned substance after his victory over Daniel Cormier for the light heavyweight title. His team believes he is a victim of taking tainted substances. If Jones is found guilty, he faces up to a four-year suspension.

Outside of McGregor, Jones is the sport’s biggest star. He is always exciting to watch fight, and many consider him the greatest talent to ever step inside the octagon. With McGregor’s future in the sport unknown, the organization needs Jones back now more than ever. In order for that to happen, the commission would need to go easy on Jones, but it’s more likely he will be suspended three years.

After a seven-year relationship with Fox, the UFC can now explore other options. The time with Fox has been good, with the UFC using Fox as a way to promote up-and-coming fighters. Even McGregor fought on Fox back in 2015, headlining the event against Dennis Siver. He has since gone on to headline five straight pay-per-views.

The UFC has done well expanding their audience with Fox. They have commercials teasing their events during football and baseball games. This helps fans from other sports learn about the fighters and their fights and can draw them into tuning into the actual event.

The UFC also has weekly TV shows on Fox or Fox Sports 1, including UFC Tonight and The Ultimate Fighter. Don’t be surprised if the UFC looks to branch out to other networks, making a deal like other sports have done. Spreading their events between ABC, NBC, CBS, Fox, and ESPN will get more eyes on the sport. The UFC has Fight Pass, an online service streaming live events and past fights for a monthly service, but a new deal with networks may prevent that from continuing.

This year has been a decent, not great, year for the UFC. Between their three biggest stars (McGregor, Rousey, Jones) only one of them (Jones) fought in 2017. And Jones only fought once.

But Georges St. Pierre did return to the octagon for the first time in four years, and when he fights, people tune in. According to Tapology, the event in which GSP headlined, UFC 217, was the top PPV for the organization of the year with 875,000 buys.

White confirmed earlier this month, St. Pierre has colitis, which will keep him sidelined for some time. GSP gave up the middleweight title he won when he submitted Michael Bisping, and it’s unclear when he will return and what weight he will be fighting at. The bottom line, they need him to return because it’s clear fans still love watching him fight.

5.  A New Superstar Has To Arise

Somebody, anybody, needs to step up and become a superstar. With their top fighters future in jeopardy (McGregor, Rousey, Jones, St. Pierre), this gives new blood a chance to step up.

The options are plentiful. Unfortunately for Demetrious Johnson, even though he is the pound-for-pound best fighter right now, he doesn’t draw fans in. T.J. Dillashaw is exciting to watch and has a good feud with former teammate/champion Cody Garbrandt. Featherweight champion Max Holloway is another exciting fighter who should bring more fans to the sport. The Hawaiian hasn’t lost since a decision loss to McGregor in August 2013, winning twelve straight. Like Dillashaw, he is a smaller guy but finishes most of his fights. In his twelve fight win streak, only three went to the judge’s scorecards.

The lightweight interim-champion Ferguson could be the most likely next superstar, especially if he gets a fight with McGregor. He is a tough match-up for McGregor and has a good chance of beating him. If Ferguson gets the victory over McGregor, he can rise to the top like Nate Diaz did after he forced McGregor to tap. Also, Ferguson isn’t bad on the mic or social media, which will help him rise.

But the sleeper to take over in 2018 is heavyweight contender Francis Ngganou. He is fighting champion Stipe Micocic at UFC 220 in January. Micocic is one of the greatest heavyweights of all-time, but since he hasn’t become a superstar yet, he unlikely ever will.  Ngganou has the knockout power fans love. His last four fights: All knockouts. All within two minutes. He is from Africa, which can help spread the sport of MMA even more worldwide.

The UFC had four of its top PPVs all-time in 2016, three of which were headlined by McGregor. In 2017, only one of their PPVs made the top 20 in all-time PPV buys (UFC 217). They desperately need someone to bring new fans to the sport since it appears some of the superstars who have carried the organization, may not fight in 2018. 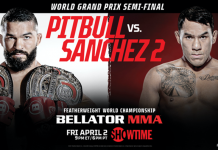