DAYTONA BEACH, Fla. (AP) — Dale Earnhardt Jr.’s phone was “going crazy” all afternoon Saturday, with friends, family members and followers wanting to wish him well before what could be his final Cup Series start at Daytona International Speedway.

“It was a ton of damn buildup,” he said.

His so-called Daytona finale ended up being a huge letdown.

NASCAR’s most popular driver scraped the wall early in the 400-mile race and then got knocked out with 54 laps remaining when Kevin Harvick spun and crashed in front of him. It was a disappointing, 32nd-place finish after a full week of hype.

“I just didn’t expect all that attention all week,” he said. “My phone buzzing all day long with social media going crazy, everybody talking about this being my last Daytona race. I hope every weekend isn’t like this as far as that goes. The attention and the reaction from the fans makes me feel great. Hopefully, we are able to turn that around and back on them for the rest of the season and thank them for all they had done.”

Earnhardt was the pole-sitter and overwhelming favorite to win the race. He clearly had one of the fastest cars in the field and spent much of the first two stages up front.

But his chances of getting to victory lane diminished when a flat tire caused him to brush the wall in the second stage. He made his way to pit row, but lost two laps while getting repairs. The damage wasn’t enough to end Earnhardt’s shot at picking up his 18th career victory at the famed speedway.

Riding behind Harvick did him in. Earnhardt had nowhere to go when Harvick got sideways in front of him.

Earnhardt’s night ended at the infield care center, the same place he ended the Daytona 500 in February. After getting checked out, he hopped on a golf cart and then stopped to sign several autographs. He even signed his own hat and gave it to a member of the National Guard and said, “Thank you for your service.”

It was a somewhat fitting ending to a weekend that was all about thanking Earnhardt.

Earnhardt announced in April that this would be his final full-time season in NASCAR’s top series. He plans to drive a handful of races in the second-tier Xfinity Series, but has not committed to racing at Daytona again.

So the track billed this race as his Daytona finale , even painting a No. 88 logo on the infield grass and dubbing the entire weekend “Daletona.” Track officials also presented him with a painting featuring three of his most memorable wins at the superspeedway: His July 2001 victory that came 4 1/2 months after his father’s fatal crash in the Daytona 500; his July 2010 win in the second-tier series in which he drove a No. 3 Chevrolet with a throwback paint scheme; and his February 2014 win in “The Great American Race.”

Earnhardt said he was a overwhelmed with all the attention leading into the race and even on pit road beforehand.

Fans were lined up 10 deep to get a glimpse of Earnhardt near his No. 88 Chevrolet, and cameras captured his every move.

Earnhardt acknowledged earlier in the week that winning at Daytona, a venue that has delivered personal tragedy and professional triumph, was his best last chance to make the playoffs. He is winless this season and ranks 22nd in points, well out of the postseason picture.

Earnhardt, who needs a victory to make the playoffs, suggested the elusive win could come at Pocono or Michigan — two places he’s won in previous years.

“I know everybody thought this was our best shot to win, but things like this give us a little more fuel to work hard and try to show people we can win at these other race tracks,” he said. 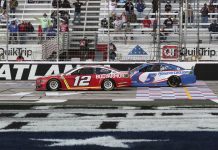 NASCAR: Blaney pilots his Penske Racing Ford to a win at Atlanta after Larson fades on old tires with nine laps to go. 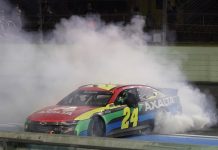 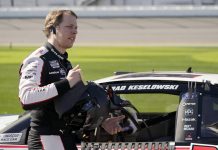 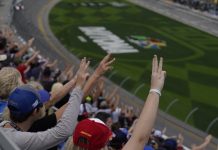 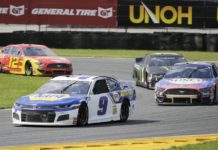 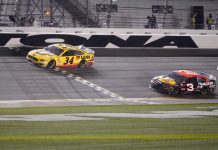