BRISTOL, Conn. (AP) — Formula One will return to its original U.S. television partner with a move next season to ESPN.

All 21 events will be televised next year on ABC, ESPN or ESPN2, with the new deal calling for more than 125 hours of F1 programming. 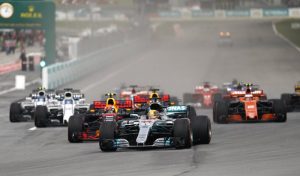 The first F1 race aired in the U.S. on ABC in 1962 when highlights of the Monaco Grand Prix aired on ABC’s “Wide World of Sports” one week after the race.

“ESPN has had a long commitment to motorsports, and Formula 1 is a crown jewel in the sport,” Burke Magnus, ESPN executive vice president of programming & scheduling, said in a statement Wednesday. “There are many passionate Formula 1 fans in the U.S. and we look forward to bringing the pageantry, spectacle and excitement of F1 to viewers across the ESPN platform.”

Monaco will air live on May 27 on ESPN and re-air later in the day on ABC after the Indianapolis 500. The United States Grand Prix in Austin, Texas, and the Mexican Grand Prix will be live on ABC.

NBC Sports Group had the F1 rights since 2013, but said it “chose not to enter into a new agreement in which the rights holder itself competes with us and our distribution partners.”

NBC said through 14 races this year, the 2017 season has drawn an average of 548,000 viewers — up 13 percent from the same point last year. Monaco on NBC averaged 1.444 million viewers, which stands as the second-most watched F1 race for NBCSG behind the 2014 Canadian Grand Prix on NBC. That averaged 1.488 million viewers.