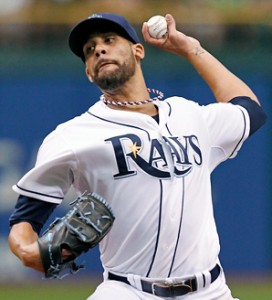 David Price (1-2, 5.31 ERA) finally earned that elusive first victory after five unsuccessful attempts as the Tampa Bay Rays defeated the Chicago White Sox 8-3.  The victory gave the Rays a series split in Chicago and improved the Rays record to 12-13.  Nate Jones (0-2, 3.27 ERA) took the loss in relief as the White Sox drop to 10-14.

Price was impressive tossing 7 innings allowing 3R/ER on 6 hits while striking out 9 and walking 2.  Joel Peralta worked a scoreless 8th  and Fernando Rodney finished with a scoreless ninth in a non-save situation. On the afternoon he threw 119 pitches 69 for strikes.

The White Sox jumped ahead 1-0 in the bottom of the first inning by pushing across a run after 2-outs were recorded and forced David Price to throw 24 pitches. Alex Rios singled and moved into scoring position by stealing second base and after a Paul Konerko walk came home on a Adam Dunn single.

The Rays tied the game in the top of the third on Jose Lobaton‘s second homer of the year. The home run extended the Rays consecutive game streak with a home run to 14 games and will look to tie the club record 15 games in a row in Kansas City Tuesday night against James Shields.

The White Sox jumped back ahead 3-1 in the bottom of the third on a Paul Konerko  2-out 2-run homer and the Rays came back to tie the game at 3-3 on a Matt Joyce 2-run homer in the top of the 6th.

David Price and the Rays got their first of two big breaks in the bottom of the 7th inning after Connor Gillaspie who had led off with a single was erased on a double play. While Gillaspie was attempting to steal second base Tyler Flowers smoked a line drive to Ben Zobrist who had moved into the path of the line drive while covering second threw back to James Loney to easily double him up.  Price got Dewayne Wise to ground out to end the inning and  his day at 119 pitches. If he was going to notch that first win he’d need his offense to come through for him.

The Rays offense was up to the task tallying 3 runs in the top of the 8th off the White Sox bullpen to take a a 6-3 lead. Nate Jones working into his second inning of relief gave up a lead off bloop single to Sean Rodriguez who advanced to second on a wild pitch. After Desmond Jennings popped out Matt Joyce walked and Ben Zobrist singled to plate Rodriguez with the go ahead run. After walking Evan Longoria to load the bases lefty Matt Thornton was brought in to face James Loney who popped out on 1-pitch for the second out of the inning.  With right hander Ryan Roberts due up Thornton was replaced by right handed pitcher Jesse Crain. Roberts immediately found himself down in the count 0-2 but battled back to work the count full and fouled off two pitches before looping a ball into shallow right that glanced off the glove of Alex Rios and two runs scored to put the Rays up 6-3.

The Rays added two additional runs off Duente Heath who after retiring the first two batters of the inning issued back to back walks to Desmond Jennings and Matt Joyce.  Jennings came in to score on a Ben Zobrist single and Matt Joyce crossed home plate on a Evan Longoria double to give the Rays the 8-3 lead.

With 2-outs and Dewayne Wise down in the count  1-2 pitch David Price appeared to throw what appeared to be strike three but home plate umpire Tom Hallion, whose strike zone was  tight all day or both teams, called it a ball. At the end of the inning Price snapped a few select words toward Hallion but it was soft-spoken Jeremy Hellickson who must have said some magic words from the bench and was ejected. After the game Hellickson seemed to suggest that the umpire ejected someone and the coaching staff designated him to take one for the team.