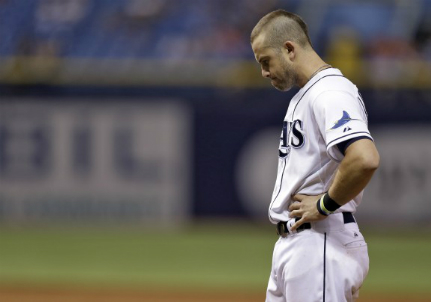 The Tampa Bay Rays aren’t doing so well. They own the worst record in baseball this season at 24-42 and haven’t scored in the past 28 innings, so this begs the question, “How bad are they?”

Jay Jaffe of SI.com published an article last summer about how the Miami Marlins went 37 innings straight with no runs scored and how it was the worst in 28 years. I mention this because the Marlins were the worst in baseball last year, wrapping up the season with a record of 62-100, 5th in the National League East. But this doesn’t explain the ‘all of MLB’ record.

The record for scoreless innings in MLB is actually held by the 1968 Chicago Cubs at 46 innings. So, the Rays have quite a ways to go to break that record.

The last time the Rays scored was in the eighth inning of the game against the Seattle Mariners on Saturday. Desmond Jennings doubled off Roenis Elías, and with two away, Evan Longoria hit a home run to left, cutting the Rays’ deficit to three runs.

Going 28 scoreless innings breaks the team’s old record of 26 innings, set in 2002. The Rays finished tied for the worst record in baseball at 55-106, per Marc Topkin of the Tampa Bay Times:

With that, #Rays tie franchise record of 26 consecutive innings without a run, set in the 106-loss 2002 season

This is even more sad:

Last AL team to be shutout 3 straight times before #Rays was '04 #Royals, at MIN.

I really hope the Rays snap this streak soon. They’re breaking all the wrong kinds of records.