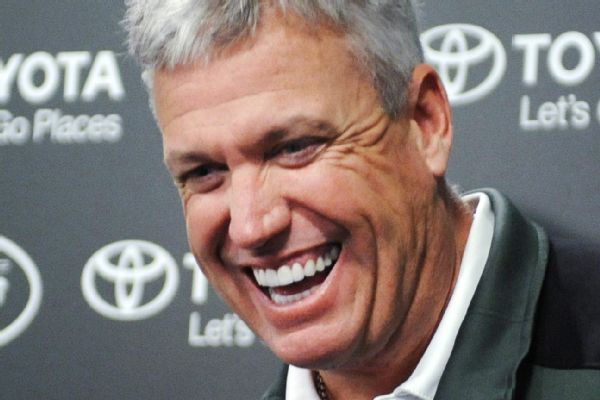 The Buffalo Bills had a press conference today to introduce Rex Ryan as head coach. Here’s what Ryan was asked and how he answered.

John Wawrow with the Associated Press. Welcome Rex. How do you draw upon the six years that you just completed with the Jets and how do you believe that can make you a better coach entering this new challenge?
Alright, well John that’s a great question. First off, mentioning the Jets, one thing I have to say is how much I appreciate the players. Through their efforts, I’m sitting here today. The thing that you take away obviously, I’m a different man right now than I was six years ago because I lacked experience as a head coach. There’s so much that you can gain the second time around. Number one, I think the principles in your philosophies…I know what wins in this league and do I have to get better in certain areas? There’s no question about it. The fact that, do we need to do a better job…do I need to do a better job in building a quarterback and all that stuff? Sure. Certainly but you learn from different things. You have to protect things. We can’t lose games because of the position. We have to take care of the football. We’re going to run the football, but we also have to be able to throw the football and doing things that a fundamental thing that I’ve always believed in is doing what your players do best. Recognize maybe some limitations that your players have but focus on the strengths of those players before you focus on the weaknesses and I think whether it’s offense or defense or special teams, that’s exactly what we’re going to do.

Tell me about the quarterback situation in Buffalo. As you were going through the interview process, you know this is a great defense but how concerned were you coming here with the quarterback that they currently have and it’s similarity to what you had in New York.
Well, I’m not concerned at all. Right now, we’re obviously in an evaluating process right now in particular about the quarterback position and other positions as well so we’re just getting on the job. I can’t tell you who that quarterback’s going to be right now but when you surround people with a…surround a quarterback with outstanding players, it’s not just about one man. It’s about every man. Not just one man and I think that’s where our focus is going to be. Do we want to develop a quarterback, not just a franchise quarterback? Of course but we’ll take steps. I think the first step that we took as an organization is to bring Greg Roman in to be our offensive coordinator. Never seen a guy get criticized more than Greg Roman for going to three championship games. He’s an outstanding coach. We have the exact same philosophy. We’re locked in line and as an organization, how we’re going to go about doing things. Whether that answers your question or not, I’m not real sure.

There’s a report this week that the Falcons job and the 49ers job were sort of higher on your list than this job. Why was that and why are the Bills the best fit for you?
No, that’s definitely false. Did I interview with the Falcons? Did I interview with the 49ers? Absolutely. I think when you’re going through it from my position, you’re sitting back. You want to coach. There are plenty of opportunities and things, but I think after I came here the first time…and you say, “What were your expectations and things like that?” I went in and quite honestly, I was expecting great things especially from the Pegulas. I had a great deal of admiration for the fact that they kept this franchise here. A lot of different things that they’re associated with and when I came in, I was kind of blown away by the direction in many things about this and I came back and I told my wife. I said, “Wow. This is really something.” My only concern was that they feel as good about me as I felt about them and so at the same time, you’re trying to find a job, you’re trying to find employment and so there were many other great opportunities out there but this was the place where I wanted to be and I was just thankful that they felt the same way.

Rex, the Patriots have dominated your division for the last six years. When you were considering your options, was there any pause for concern or hesitation in being in the same division still as Brady and Belichick?
Well you guys know how I feel. Number one, there’s no hesitation in this. We’re not afraid of anybody and certainly not afraid of them. We respect them. Understand that I recognize the fact that they have won our division the last six years. I think maybe the last, maybe 10 of the last 11 years they have won our division. But, that doesn’t guarantee they’re going to win it next year. And it doesn’t mean that we can’t be the team on top. I think there is a lot of talent that we already have here, and I can’t wait for that either. That opportunity, again, to play them, they certainly know that I’ll look forward to those games. That’s for sure. Again, we’re here, we’re going into every game and we expect to win. Period. This team is going to expect to win regardless of who we play. If they want to bring back Russ Francis and John Hannah to play guard, we’ll play them too.

You mentioned the defense and how you want to improve on their high rating and ranking. How much are you salivating to get your hands on that D, and what is it going to look like next year? How are you going to mold that unit?
Well first off, it starts with putting together a heck of a coaching staff. Obviously, Dennis Thurman has been my right hand man for a long time. We’ve been together I think for 12 years. We have coached together. Donnie Henderson is already on the staff. We worked together in Baltimore. One of the finest coaches I’ve ever been around. So I think that’s where it starts. Then you look at obviously the players that you have. You have three Pro Bowl players in the defensive line. You get a secondary that challenges. You get an outstanding group. The front seven is outstanding. So, do I expect to be outstanding on defense? Of course. There’s no question. We expect to be an outstanding football team. The one thing we’re going to care about, we don’t care about the numbers, and we know where they’re going to end up. There’s no doubt we know where we’re going to end up. We always end up there. But, it’s the wins. That’s what we’re looking for. Whatever it takes to win, whether we’re first or second by two yards, something like that, we expect to play great defense. But, we want to win and we don’t care what it looks like. We’re going to do whatever it takes offensively, defensively and on special teams to play complimentary football. So it’s not just going to fall on one unit. It’s going to fall on our entire football team. The only thing that matters at the end of the day is the wins and losses.