While Luke Scott and Carlos Pena received billing as Andrew Friedman’s marquee offseason purchases, nobody has offered a greater return on investment than Fernando Rodney. Rodney’s renaissance as the Tampa Bay Rays “finisher” is nearly as head-scratching as the initial signing. But, much like the acquisition itself, dig a little deeper and there are improved processes to go with the improved results

As the part-time closer for the Angels last season, Rodney walked 28 batters whiles triking out 26 in 32 innings. The right-hander has already pitched 22-2/3innings this season, racking up 22 strikeouts and unintentionally walking just two batters. The 35-year-old’s stuff is largely the same—a high-velocity fastball and devastating changeup—but where did the improved control come from?

Earlier in the season a colleague of mine, R.J. Anderson, noticed that Rodney had changed his position on the mound since his days with the Los Angeles Angels of Anaheim. While subtle, this change could have a greater impact on the amount of movement Rodney receives on his two-seam fastball. The move also may have contributed to improved control. A shift on the rubber is not the only tweak made to Rodney’s mechanics.

After speaking with Anderson, it appears Rodney has altered the leg lift in his motion. The image below shows Rodney barely lifts his leg off the ground nowadays. The lower lift means less movement in his delivery and better balance in his follow-through. Rodney’s hands also break much lower; although the images themselves are not in perfect harmony. A lower hand-break has helped Detroit Tigers’ Max Scherzer with his mechanics as well. 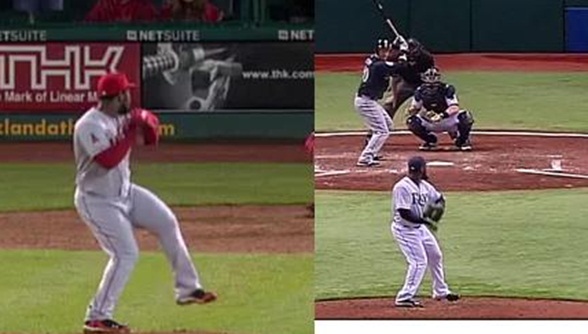 These small adjustments along with the rubber positioning could explain how Rodney has transformed from a wild bronco to a late-inning stallion. This season,Rodney is throwing a strike nearly 70 percent of the time when using his fastballs(both two- and four-seam); more than a 10 percent improvement over his fastball control from a season ago.

In addition to throwing more strikes with the heat, his changeup was been as wavy as ever, as the pitch is generating 50 percent whiffs this season according to brooksbaseball.net. Sample sizes matter, of course, but the well-located fastball should have an ancillary benefit to his already plus-offspeed pitch. The combination has worked so well that he has all but shelved his slider in favor of the 1-2 punch.

It is impossible to put a number on how much the change in positioning and delivery has contributed to Rodney’s resurgence; however, it is likely the adjustments have had a positive impact on his improved control. While it looks like the Rays sometimes have a magical touch, it’s really just the combination of good processes, good information, and open-mindedness put into action.