As of today, tennis still has the United States Open and the French Open on its touring calendar. The American tournament is scheduled to begin on August 31st in Queens, New York not far from the site of the worst concentration of COVID-19 in the world. That date remains in flux.  The French Open in Paris is supposed to start on September 20th. It appears some of the top players in the world are not too keen coming to New York. Novak Djokovic, who is the president of the ATP Player Council, is sounding alarms and giving reasons why he is not very interested in traveling to New York. “The rules that they told us that we would have to respect to be there, to play at all, they are extreme. Also, we could bring one person to the club which is really impossible. I mean, you need your coach, then a fitness trainer, then a physiotherapist. We would not have access to Manhattan, we would have to sleep in hotels at the airport, to be tested twice or three times per week. They want the tournament to go ahead at any cost for economic reasons, which I understand, But the question is, how many players are willing to accept those terms.” Rafael Nadal is definite no right now but left the door open to attending. Ashleigh Barty is on the fence. Getting to New York might be the easiest part of trying to play. There could be a 14-quarantine for all non-American players arriving in New York and there could be a quarantine for those players who are interested in the French Open upon arriving in France.

The US Open, if it does proceed, will become a television event with no customers in the seats. No one knows the trajectory of COVID-19. Tennis players are wary about the virus. 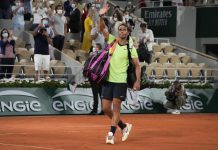