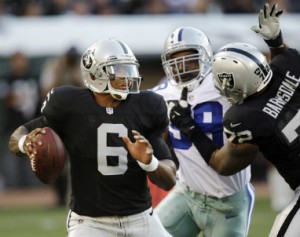 Last week Terrelle Pryor burst into the conversation for starting quarterback job for the Raiders. Whether that decision was a lock would depend on the final preseason game and if he could have a repeat performance. He was unable to deliver and therefore left plenty of questions heading into the regular season.

Last week against the Bears, it wasn’t just Pryor’s standout performance but also Matt Flynn’s poor showing that had people talking about Pryor unseating Flynn as the Raiders’ starter. The one big caveat being, of course, Flynn was facing the Bears’ starters and Pryor was facing backups. But even still, the spark Pryor provided was undeniable. Plus, Pryor can’t exactly be faulted for the other team removing their first teamers. He controlled what he needed to control and dominated the competition presented.

That performance earned him the start this week while Matt Flynn is resting tendinitis in his throwing arm – the same issue he had last preseason which opened the door for Russell Wilson to step up and take his job.

For more on this story visit: SB Nation