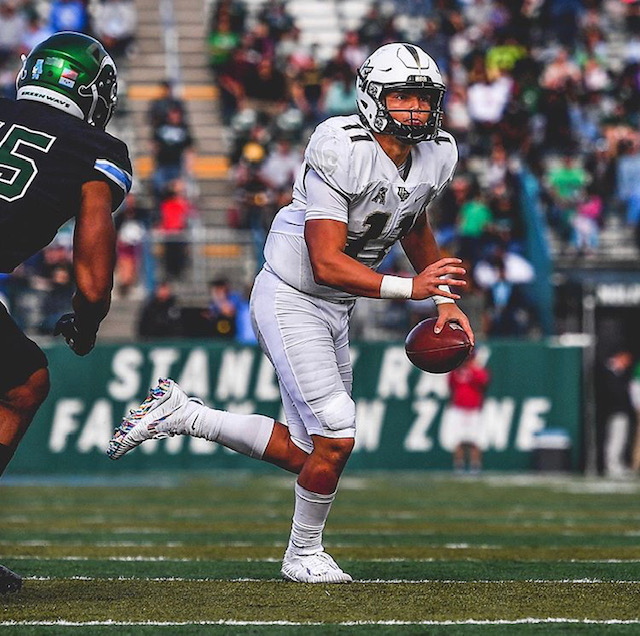 Josh Heupel and his Knights (8-3) celebrate a different outcome with the same score. After a loss to Tulsa 31-34 on the road in Oklahoma, the Knights snatch a win from the Green Wave of Tulane in New Orleans 34-31 at the Yulman Stadium. It was a cool Saturday Afternoon in the heart of New Orleans just miles from Bourbon Street and the Green wave (6-5) took a shot to stretch their home winning streak to 8 games.

The Green Wave have managed to score the minimum of 38 points, with the highest of 58, on their home turf but the Knights Defense made a statement with Tulane coming up empty on their opening drive.

UCF scored on the first position for their 8th time in 11 games. Place Kicker, Dylan Barnas, for the Knights connected on both of his field goal attempts, including the field goal that gave UCF an early advantage on their opening drive against Tulane. Knights Freshman Quarterback, Dillion Gabriel, thought quick on his feet and lead the Knights to a 1st-down three different times on one drive.

“Some of it designed, just based on what they were doing in the box and trying to make the numbers right in the run game.” Rallied Knights Head coach Josh Huepel, when questioned on Gabriel’s career high 58-yards on foot. “Some of it was just scrambles and him making plays, thought he did a great job. His best game of using his feet in the right way throughout the course of the game.” Dillion capped the drive with a 23-yard pitch an-catch to Marlon Williams for who ran it into the end zone for the first UCF touchdown.

Running-back Otis Anderson, uses his bag of tricks and a vital block by Wide receiver Gabriel Davis, to wiggle to the sidelines for a 44-yard run to the house for another UCF touchdown. Darriel Mack scores a 1-yard run in the third quarter, followed by a 2-yard pass to Anthony Roberson for a touchdown. Barnas comes on in the 4th quarter to tack on what ended up being the winning field goal of the game with 34 points.

The Wave made their first splash in the 2nd quarter when Tulanes’ Running-back, Corey Dauphine, found a hole in the D-line and scored from 14 yards out. Corey goes on to score another touchdown in the fourth quarter to close the gap to 24-17 against the Knights who were than struggling to catch the ball.

The Knights go back to the drawing board after UCF gave-up a 98-yard Kick-return early in the 3rd quarter. Stephon Huderson for The Wave, breaks open over the mid-field and ran it in for a touchdown from the 2-yard line to bring them back into the fight 24-14. That was the first UCF allowed a touchdown from a punt return since October 28th, 2017. (Austin Peay)

Tulane scored 24 points in the second half but the Knights ended the game 34-31 after recovering the on-side kick as the clocked ran down. Dillion Gabriel went for 24 of 46 for 317 passing yards with a season high quarterback runs with 58-yards. Marlon Williams had 9 catches for 119 yards. The Knights rallied up 2 scoring drives in under 2 mins which increases their number to 45 scoring drives in less that 120 seconds.

Tulane was scoreless in the first quarter so the Knights defense now have 15 quarter of shut outs of the opposition. UCF went into Saturdays’ match with the highest tackling rate in the Nation with 9.4 and closed the Waves’ out with 9 tackles.

The Knights keep their hopes alive for their third straight American Athletic conference championship defeating the Green Wave of Tulane 34-31. UCF holds down second place spot in the Standings trailing the thriving Cincinnati Bearcats who are 7-0 in division wins and 10-1 for the season.

The UCF Knights head home to face the USF bulls at the Spectrum Stadium for the WAR ON I-4 on Friday the 29th at 8 p.m.

The Green Wave of Tulane head to SMU to face the Mustangs on November 30 at 4 pm.