In the bottom of the seventh inning David Price was ahead 1-2 on Dewayne Wise when he threw what looked to be a perfect strike to end the inning but home plate umpire Tom Hallion called it a ball. Price was animated as he received the ball back from catcher Jose Lobaton but seemed to shake things off as Wise harmlessly grounded back to the mound to end the inning.

Here is the pitch location from MLB.com as well as the pitch f/x data from Brooksbaseball.net. Additionally, kudos to MLB.com for making the video available of the incident (HERE): 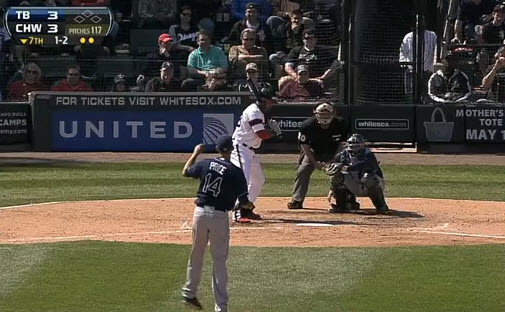 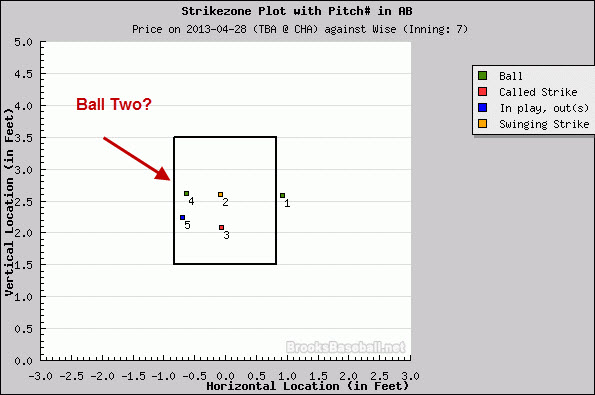 As Price walked off the mound Tom Hallion walked up the first base line and he and Price exchanged words.  Immediately several members of the Rays bench began yelling at Hallion and as a result Jeremy Hellickson was ejected  from the  game. Often times a confrontation between player and umpire is settled after the game and we don’t hear much more about it but not this time.

After the game David Price said that as he was walking off the field Hallion told him to “throw the ball over the F***** plate” and Price claims that he did nothing to provoke this.

At the same time he calls Price a liar he admits that Price did nothing to provoke him: “He might not have said anything but he certainly gave enough body language to insinuate that he was pissed off.”

Hallion asserts that he said “Just throw the ball” to which David Price has responded with a dose of logic suggesting that the entire dugout erupted on Hallion which would not have happened if he had just said throw the ball.

Topkin gives Hallion one more opportunity to explain himself a little better and asks if this is just a he-said she-said thing to which Hallion responded “I’m just telling you, he’s lying. It’s plain and simple.’

As to why Hellickson was ejected Hallion told Topkin that “He was told to knock it off, him and Morse (Moore) were at the dugout rail and I told them to knock it off, and he thought it was okay for him to have his final comment, at which time he was ejected.”

As pointed out by JP Peterson on his twitter account that Hallion has had action taken against him before by the league office:

@davidprice14 #Rays Hallion was suspended in 1999 for bumping 2 players aggressively. Guy’s got issues. Selig needs to adress this quickly

There are several other great links to this story:

Cork Gaines over at Rays Index does a fantastic job: Several Rays Call Umpire A ‘Liar’ After Confrontation With David Price [VIDEO]