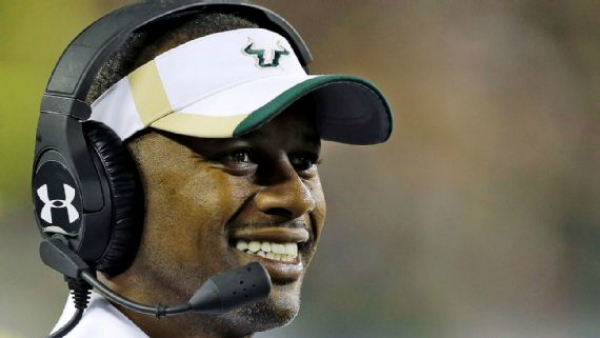 USF head coach Willie Taggart has lead the Bulls to a stellar and surprising season.

Leading the Bulls to an 8-4 season with upsets over East Carolina, Cincinnati, and AAC East division champion Temple. The Bulls have improved tenfold over the three years Taggart has been there.He was able to rebuild the organization from top-to-bottom and get it.

Nonetheless, with the coaching carousel that is college football this year, a coach like Taggart, who can take a sub par team and lead them to an 8-4 season, is a hot commodity in today’s sports world. Taggart has been asked by numerous coaching staffs to come over to their program. The leading candidate for Taggart has been Steve Spurrier-less South Carolina. South Carolina has reached out to Will Muschamp and intends to reach out to Greg Schiano and Arizona Wildcats current coach, Rich Rodriguez. However, South Carolina had gone after Taggart a bit more aggressively.

Even though Taggart has been interviewed for the South Carolina job, USF struck first. Late Saturday afternoon, in the midst of championship Saturday, USF made the decision to keep Taggart on for a just little while longer.

Taggart sent out a tweet saying that USF has decided to give the head coach a five year extension to his contract, therefore nullifying any chance that he is headed up to South Carolina. The officials at USF decided that their head coach is too valuable for them to let go and Taggart has evidently impressed them enough in his first three years to stay for an extra five.

Stay true to the people that believe in you. 5 more years. Go Bulls!!#LetsGet9#UnfinishedBusiness pic.twitter.com/zANw0BHzzu

Judging by this preliminary report from the head coach himself, it looks like he is going to stay on and coach the Bulls for whichever bowl game they end up in and for the next five years, including when Florida State goes down to Tampa to play them at home next year.