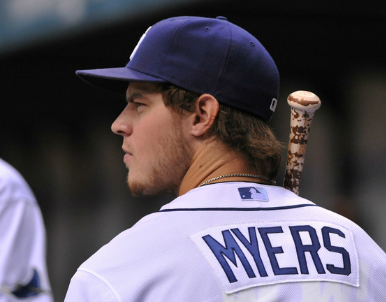 Rays outfielder Wil Myers was activated Wednesday after missing 70 games with a fractured wrist. Despite the 6-0 shut out that Detroit Tigers pitcher Rick Porcello dished out, he says the most important thing for him is moving forward.

“The most important thing going forward for me,” Myers said, according to Marc Topkin of the Tampa Bay Times.

Before he broke his wrist on May 30, he played 53 games. In those games, he was only hitting .227 and had five homerunes, 25 RBIs and a .667 OBP. He went 0-for-3 Wednesday night but is confident and determined to shake off the dust and improve.

He compared how he followed a poor 2011 season with the Kansas City Royals to an outstanding AL Rookie of the Year Award season in 2012.

“Obviously I was having a very disappointing season (before the injury), and I really feel like 2011-12 all over again, having a bad 2011 and then coming back in 2012 trying to prove to everybody that was a fluke,” Myers said. “So really two miniseasons in one coming into this again.”

As Myers looks to save his season, Maddon believes he can be a key factor in saving his team’s season.