Bill Russell, who passed away at the age of 88, was certainly one of professional basketball’s greatest players. His team’s won 11 championships in a span of 13 years between the 1956-57 season and the 1968-69 season. Russell grew up in the heavily segregated south in Louisiana and in 1961 he took his first NBA-related civil rights stand, two years after the Minneapolis Lakers Elgin Baylor refused to play in a game in Charleston, West Virginia against the Cincinnati Royals because of Jim Crow and weeks after the American Football League’s Boston Patriots player Walter Beach complained about being separated from his teammates during a pre-season game in New Orleans and being forced to stay a different hotel. Beach was cut by the Patriots and labeled a troublemaker. Russell and other black members of the Boston Celtics were refused service at a Lexington, Kentucky restaurant. They boycotted the game. Blacks were expected not to complain publicly about discrimination.

Russell and K.C. Jones took Satch Sanders and Sam Jones to see Celtics coach Red Auerbach. “I told Red we were leaving. I said it was because it was important to me that everybody, everywhere, knows that the Black players are deciding they’ll stand up for themselves.” A fifth Black player for the Celtics, rookie Al Butler, left with them, and two Black players for the Hawks joined the boycott. One of those St. Louis players was Cleo Hill, a first-round pick earlier that year who was also denied service in Lexington. Russell had clout, Hill didn’t. St. Louis Hawks coach Paul Seymour was told by team management to severely diminish Hill’s offensive role. Seymour refused and was fired. Hill never played in the NBA after that season. He later said he didn’t think race played a part in ending his career. That was Bill Russell’s NBA in 1961. 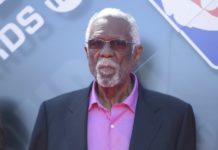