Dennis Murphy passed away at the age of 94 on July 15th. There wasn’t much said about him during the National Basketball Association’s final round and the National Hockey League never did recognize his existence but Dennis Murphy changed how the NBA and the NHL operated. Murphy started two leagues, the American Basketball Association which began play in 1967 and the World Hockey Association which first dropped the puck in 1972. Neither league was successful. The NBA took four ABA teams in 1976 and the NHL “expanded’ by four teams in 1979 by taking in four former WHA franchises. But Murphy’s leagues changed sports economics and brought global hockey to North America as WHA teams featured top Swedish and Finnish players. Murphy’s ABA had a three-point play and a red, white and blue basketball and some of the biggest https://www.youtube.com/watch?v=4XILmTIfZggstars of the time including Julius Erving. The ABA took a lot of knocks but the 1977 NBA All-Star Game had 10 of its 24 players on the roster with ABA roots. Today’s NBA is more ABA-like than the NBA of 1976. The NBA All-Star Weekend came from an ABA promotion to liven an All-Star Game in Denver. It featured a slam dunk contest and a concert.

Murphy’s ABA signed underaged players, the ones who did not complete four years of college basketball. The WHA signed 17-and 18-year-olds including Wayne Gretzky in 1978 who played for Indianapolis. The WHA forced the NHL to accept the fact that 18-year-old players could be eligible for employment in the established league, Both the ABA and WHA were in cities that would eventually get NBA and NHL franchises. Murphy helped create World Team Tennis and a roller hockey league.  The ABA and WHA failed to get big TV contracts and that killed Murphy’s creations. Murphy did change sports. 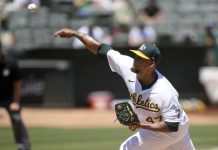