Game comes down to free throws for Hornets

The Hornets led by 26 points midway through the third quarter, then wasted it all before Walker saved them on a night when he eclipsed the career 10,000-point mark.

Wade scored to tie the game with 12.3 seconds left, setting up the final play. Walker drove on Miami’s Rodney McGruder, wound up on the ground and referee Scott Wall called a blocking foul — one the Heat argued to no avail. Walker made the first, missed the second and time expired before anyone could contain the rebound.

Charlotte was 12 for 20 from 3-point range in the first half, fueling its run to the huge lead. The Hornets then went 1 for 12 from beyond the arc in the third quarter, and missed their first three tries from deep in the fourth quarter before Monk rattled one down for a 103-97 lead with about 5 minutes left.

But it wasn’t over, not by a long shot.

Wade made a pair of 3-pointers, then set up Whiteside for a basket that got the Heat within 107-105. Miami kept chipping away, getting within 111-110 on a drive by McGruder with 46 seconds left. After Michael Kidd-Gilchrist made one of two foul shots, the Heat had the ball down two with 24.7 seconds left.

Wade tried a 3 for the lead and missed badly — so badly that he knew where the rebound was going. He scooted in, got the board himself and laid it in for a tie with 12.3 seconds left to mark the first time that the Hornets hadn’t led in the second half.

That’s when the Hornets gave the ball to Walker for their final play, and he delivered.

The Heat led 15-6 early, and it didn’t last long — as the next 24 minutes were basically all Charlotte.

Miami outscored Charlotte 26-10 over the remainder of the third to get within 92-82 going into the final quarter. Dragic had 13 of his points in the third, and his alley-oop to Bam Adebayo for a dunk got the Heat within six less than a minute into the fourth.

Hornets: Charlotte had lost six straight against Miami. … Walker got his milestone basket on a drive in the third quarter, and coach James Borrego said getting to 10,000 is something to celebrate. “You’re talking about being in an elite class,” Borrego said. “You’ve got to work. You’ve got to get better every single year. You can’t relax.”

Heat: Miami’s three games have been decided by margins of three points, one point and one point. … Miami is 9-2 in home openers under coach Erik Spoelstra. Both losses have come to Charlotte. … The Heat outrebounded Charlotte 49-40, but saw their 16 turnovers converted into 25 points.

It was the final home opener for Wade, who has dubbed this season “one last dance.” He and fellow 16-year veteran Udonis Haslem addressed the Miami crowd before the game. “We want to thank each and every last one of you guys,” Wade said.

By Tim Reynolds of the Associated Press. 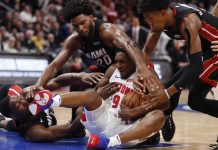 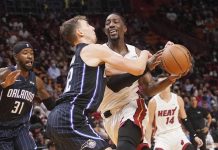 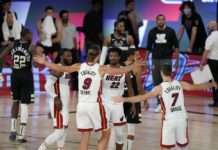