Should I or shouldn’t I?

Every men’s college basketball player who has NCAA playing eligibility remaining has to declare their intentions concerning the NBA Draft by April 22. In truth there are probably three dozen players in college or playing in leagues in Europe and elsewhere who really are good enough to land a job in the league. But there could been much more who actually declaring for the draft, which is only made legal by an agreement between the owners and players, who will eventually return to the college game. All players considering filing for an NBA playing position can now hire agents to help them figure out if it is worth trying out for an NBA job. If a player decides after the NBA Draft Combine or just the applying for an NBA job is not the right thing to do, the player has until May 29th to reverse his action and go back to school. The NBA has a deal with the players association that high school players who are seniors need not apply for an NBA job.

The NBA through its development league will slowly bring 18-year olds back into the fold. First step, identifying the top players and then offering them $125,000 to play in the NBA’s G League for a year. Colleges allegedly won’t spent for players but the G League will and that could be a major problem for colleges who make money off of the best basketball players who look at the college game as a year between high school and the NBA. Those players won’t have to worry about hiring an agent, getting paid and selling their likenesses. They get the money. These players are not going to college for an education unless they consider education an opportunity to apprentice in the business of college basketball. NBA is considering opening its door to elite 18-year-old players in the near future.

The European League Of Football Plans To Start In July 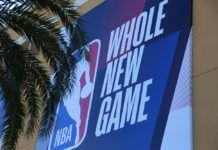