whatever happened to that European Division?

The National Basketball Association’s one game trip into London is done. The NBA keeps sending teams to play a game in London but the NBA was never able to establish a European Division which was a goal of former Commissioner David Stern. The plan was to establish the conference by 2010 with London having one of the franchises. The NBA seems to have put the notion on permanent hiatus. Europe has an established basketball leagues and may not need the NBA.

The NBA has had an eye on Europe for more than five decades. The Boston Celtics’ coach Red Auerbach really began the globalization of basketball in 1964 when he took a group of NBA players to Europe with the goal of beating the Soviet National Team in Moscow. Auerbach was annoyed that the Soviet Union team was beating up on American college kids in various international tournaments and decided to march on Moscow with the help of his friends at the United States Department of State. Auerbach’s goal was to get a Soviet visa for himself, his staff and players and be a Johnny Appleseed by putting seeds down in various European countries by playing games and giving clinics on his march on the European continent. Auerbach got as far as Cairo, Egypt. He never did get the Soviet visas and was stopped but along the way throughout Europe and into Cairo, Auerbach provided a foundation that would eventually produce quality European basketball players who would play in the league and open up international markets.  In 2016, Commissioner Adam Silver ruled out a European division although he insisted that the league would love to have an All-Star Weekend in London and would continue playing annual games in London.  The NBA seems more interested in Mexico City these days than in Europe. Love is fickle. 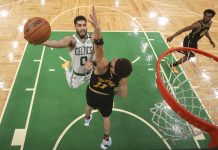