“Come here big guy,” O’Quinn said in a welcoming voice. “Let’s talk before we do this.”

In an effort to bring awareness to the mentoring programs for the Big Brothers Big Sisters of Central Florida, O’Quinn offered to have his bushy, black beard shaved off on Tuesday in Winter Park. The beard had become as much a trademark for the 6-foot-10, 250-pound O’Quinn as his hustling and bruising style of play under the boards the past two seasons for the Magic. But O’Quinn – who hadn’t shaved since the start of training camp last October – was more than willing to change his look for a good cause on Tuesday. 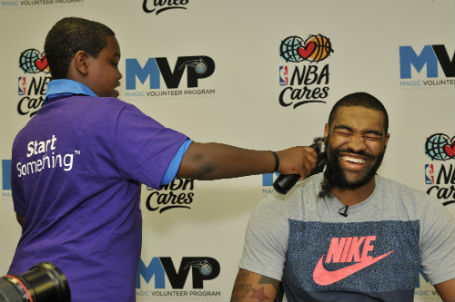 “It’s tough shaving the beard because you get used to it, but my showers might change a little bit now,” O’Quinn said with a big laugh. “I can put my products up for a little bit. But this was for a good cause. (Jalen) had a good time doing it and I had a good time. And we just so happen to find out that he’s from New York, so that made me feel a little better about it.”

Jalen, formerly of Bayshore, N.Y., on Long Island, now lives in East Orlando and is a fifth grader at Castle Creek Elementary. Jalen, who has been a part of the Big Brothers Big Sisters program for six months, was admittedly nervous shaving O’Quinn’s beard, but a professional barber was on hand to give him shaving tips. Jalen said the experience of meeting O’Quinn will always be special for other reasons.

Big Brothers Big Sisters of Central Florida CEO Jada Smith shared the sentiments of Jalen because she knew that O’Quinn’s involvement would help bring awareness to a program that badly needs more volunteers to serve as mentors for youth throughout Central Florida. The program serves about 700 kids each year in Orange, Osceola, Seminole, Lake and Brevard Counties, but there are still 2,500 others on waiting lists because of a lack of male mentors. 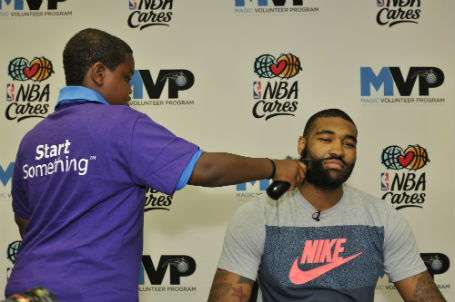 Eighty percent of kids on the waiting lists are males of African-American and Latino descent, so the push is on to find men who can mentor and spend time with children in need of care and guidance.

“This is beyond awesome. It’s like one of those presents that you get under the Christmas tree that you don’t expect,” Smith said of O’Quinn’s contribution on Tuesday. “When the Magic called and told us about this opportunity, we said absolutely. It was a perfect way to bring attention to the fact that we need men to be a part of this program.

“This gesture, while it’s a fantastic big deal, it’s just a small way that our mentors can make a difference,” Smith continued. “It’s an easy way for people to get involved. A lot of men are not sure how to interact with kids like the Jalens of the world, but really it’s just about giving them time and showing them that they matter. We’re beyond thrilled that Kyle shared some of his time with us.”

O’Quinn was plenty involved on Tuesday, especially when it came to trimming his heard. When Jalen refused a practice session on O’Quinn’s arm and immediately went to work on the beard, O’Quinn cracked: “No warm-ups? Straight to it, huh?”

O’Quinn, who playfully grimaced at the first cutting of his beard, then had a couple of joking warnings for the timid 10-year-old, saying, “Start down here (on the beard) and don’t touch anything up here (in his hairline). And when Jalen got aggressive with the cutting, O’Quinn joked, “He’s jabbing me! Be nice to it! That beard didn’t do anything to you!”

When the shaving was halfway complete, O’Quinn was left with one side of his face shaved tightly and one side still featuring four-inch strands of hair. That prompted Magic Community Ambassador Bo Outlaw to remark that O’Quinn resembled “Two Face,” a villainous character from Batman. Joked Outlaw: “Look, it’s good Kyle and bad Kyle.”

When the trimming was complete and O’Quinn had piles of hair sitting around his feet, he took a look at his face and let out a sigh of relief. He admitted that he nearly shaved his beard off last summer during Florida’s sweltering months. O’Quinn remarked that he could finally wash his face again and that he looked “like a freshman in college.” But he knows deep down that the day was about so much more than just cutting facial hair.

“I was telling my mom on the way here, I never had an opportunity to be part of a program like this. I never had a mentor other than my parents,” O’Quinn said. “It’s different when you have somebody who you can open up to other than your parents. Your parents do a great job, but when you can step out of that relationship and talk to somebody else, it’s a good thing. This program is top-notch and I’m jealous that I wasn’t a part of it (as a kid).”

O’Quinn, who finished tied for 20th in the NBA in blocked shots this season, takes seriously his job as a role model for kids who look up to him and want to be just like him.

“I’m at the so-called highest point of my basketball career, so it’s a good opportunity to be a role model,” he said. “I have to take advantage of it and let people follow in your footsteps. You know what you looked up to as a kid while watching TV, wanting to be like people you didn’t even know. So for these kids to be able to interact with us, it makes me feel great.”

O’Quinn said many of Orlando’s players have already gotten back in the gymnasium for voluntary workouts even though the regular season just ended three weeks ago. O’Quinn made significant strides last offseason by working on his game throughout the summer months and he plans to do the same this time around alongside of teammates Victor Oladipo, Tobias Harris, Maurice Harkless, Andrew Nicholson and Doron Lamb.

“We took two weeks off and we got back to working at it,” O’Quinn said. “We’re keeping it light and taking care of our bodies right now. Then, we’ll be ready to hit it hard again next month.”