It probably should come as no surprise that the National Basketball Association Commissioner Adam Silver has signed a deal with the Las Vegas-based MGM Grand Hotel, which is also a sports betting casino that allows the hotel to become the Official Data Partner of the NBA. Silver has been pushing for legalized sports gambling and has struck his first deal, one that will bring $25 million into the league and allows the hotel and other properties that MGM owns in Las Vegas to use NBA logos and more importantly NBA data in the hotel’s sports books. The NBA boss thinks that sports betting will increase interest in his product, basketball games.

Whether the partnership between MGM and the NBA opens the door for an expansion or relocated franchise in the city is unknown at this point. MGM was the sponsor of the NBA’s Summer League this past July. Las Vegas embraced the National Hockey League’s Golden Knights expansion franchise in the 2017-2018 season, a year which saw the team get to the league’s final round. Nevada is kicking in $750 million to help fund Mark Davis’s Raiders franchise stadium. The team will relocate from Oakland to Las Vegas in 2020. There is a question of market size. The Vegas Golden Knights team was a box office smash competing with stage shows and gambling. The gambling issue never really should have been a concern particularly with more and more communities around the country embracing gambling. Sports betting is slowly taking hold outside of Nevada with Delaware and New Jersey taking action and other states eventually coming on board. Silver initially wanted some sort of integrity fee from states that offered gambling, seeking one percent of the take. States slammed the door on that idea. But Silver and the NBA will get marketing money from a sports book. The integrity fee may be gone. 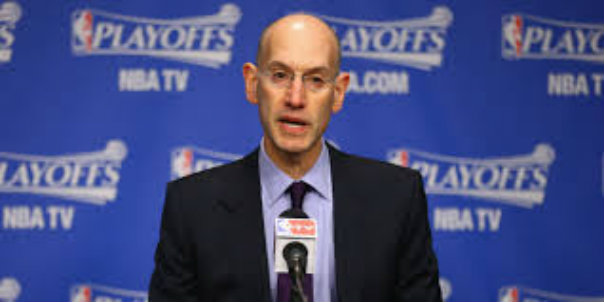