The NBA Has Its Price To Support Gambling.

The National Basketball Association and some states are getting ready for the Supreme Court of the United States to rule that the 1992 Professional And Amateur Sports Protection Act is illegal and that states like New Jersey, Delaware and New York can establish a sportsbook. The 1992 federal legislation has restricted sports betting to just four states, Nevada which has a full sportsbook, and limited betting in Delaware, Montana and Oregon. Delaware and New Jersey have been blocked from implementing full sports betting by lower court decisions. National Basketball Association Commissioner David Stern in the 1990s testified before a New Jersey legislative committee that the National Basketball Association wanted no part of a sportsbook in Atlantic City casinos because the league’s integrity would be on the line if sports betting was legalized. By 2015, Stern’s successor Adam Silver thought the league could support sportsbooks because it would create a new revenue stream for the business. Last week, NBA attorney Dan Spillane testified before the New York State Senate Committee on Racing, Gaming and Wagering and outlined what the NBA would like to see should New York be able to establish a sportsbook. The NBA wants a piece of the action starting with a one percent take of every bet placed. The NBA sees money.

But the NBA does not want sports betting limited to some large room in some building. The league is also proposing online betting which means people inside an arena could bet on NBA games with relative ease through their phones. The NBA wants consumer protections and to monitor betting. The NFL and the NCAA have been in court to keep states from opening sportsbooks particularly in New Jersey. The NHL and Major League Baseball seem ready to embrace sports betting if the Supreme Court says yes. There is big money that that can flow into their businesses. 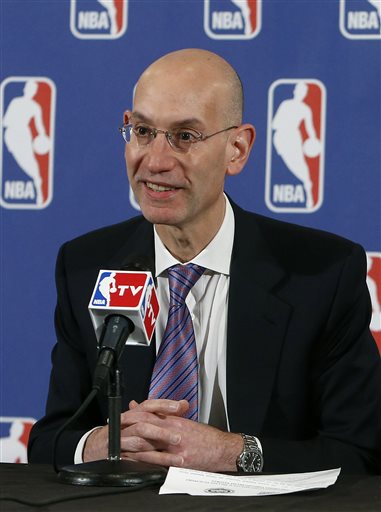 Adam Silver is in favor of sports gambling.