Magic GM Rob Hennigan took on a difficult assignment upon arriving to Orlando. His first task, try to convince Dwight Howard to stay. That predictably didn’t work, and task #2 was trading the franchise player, which never ever ends well. So going in, it was safe to say it was a heavy rebuild that would take a few years, minimum, and would involve tanking (not on purpose, but because being passive in free agency leads to higher picks).

Before reading more in-depth below, I’d sum up by saying Rob Hennigan has been a singles hitter at GM for the Magic. He mostly did okay in the draft, especially versus other franchises, but never hit a home run. Heck, not even a double at this point. He didn’t bust a lot, but a homer and a strikeout scores a run, while a pair of singles don’t if you follow my lead. Trades and free agency were a mixed bag. Without a star in tow, he changed direction frequently with the roster. I don’t think he’s a buffoon, but he wasn’t lucky, and wasn’t smart enough to land a star with with his limited opportunities. In the end, he aggressively erred too much and ended up where he started.

Hennigan hasn’t been a disaster. He also hasn’t succeeded. Below are a list of his transactions via BasketballReference.com and my thoughts on where he did well, where he failed, and the frequent number of times that are still debatable.

The Dwight Howard trade (He had to do it, and passed on deals that would’ve been worse. Managed to get draft picks and a young player in Vucevic out of it.) 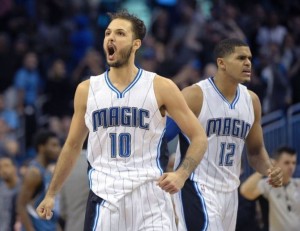 Traded Channing Frye to Cleveland (fixed his own mistake)

Nik Vucevic extension (a bargain for a couple more years)

Tobias Harris resigning (will revisit this below)

Traded for Jodie Meeks (gave up a 2nd rounder, and might get that back for Meeks’ expiring deal)

Hired Jacque Vaughn (passed on other younger, better Spurs assistants in the process) 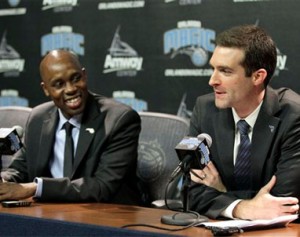 Drafted a decent player in Victor Oladipo (Typical Henny. Swung for a single, and got on base but passed on a group of equal or better players including Giannis Antetokounmpo, CJ McCollum, Rudy Gobert, Kentavius Caldwell-Pope, Otto Porter, Steven Adams, Dennis Schroder, Robert Covington, etc. If he picked either of first 2 players they’d have a cornerstone piece.)

Traded a pair of 1st round picks [Dario Saric plus gave Philly back their 1st round pick this year {The Sixers would’ve had it lottery protected thru 2019}] for Elfrid Payton (Payton is not a bust like many others in this draft, but a major error considering what they’ve potentially given up)

Drafted Mario Hezonja (I’m not saying it’s a bust, but it gets you fired when others picked after do more early and your guy barely plays. I’m more than comfortable calling it a mistake when Myles Turner and Devin Booker clearly look better, and others look as promising if not more.)

Hired Scott Skiles (I was outraged at the time, and the results only further it)

Traded away Tobias Harris for cap space (made worse when they paid $15 for one year of Jeff Green this season. No matter how you look at it, they should’ve had either Harris or Redick.)

Things that are debatable:

Traded JJ Redick (who signed next season for reasonable 4-27) for Tobias Harris (who was cheap for 2 seasons before signing 4-64. Made sense at the time, and worked out well initially which has mean leaning more toward win than loss, but price-tags and value make it a worthy-debate.)

Drafted Aaron Gordon (Julius Randle and Nikola Jokic are the primary guys they passed on. Also noteworthy they lacked the 2nd round pick that could’ve nabbed Jokic because of an Otis Smith deal for Justin Harper.)

Traded Maurice Harkless for a 2nd round pick (with Harris, Fournier, Oladipo, Hezonja, and Gordon rostered it made sense. He makes 4-40 now is further developing. Tough call either way.) 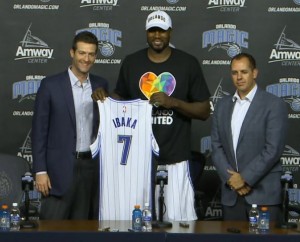 Traded Victor Oladipo, Ersan Illyasova, and #11 pick (Sabonis) to OKC for Serge Ibaka (A few things: 1. The Magic would’ve taken Sabonis and it’s too early to say if that was the right or wrong pick. Nothing stands out honestly behind him, but it might in a few years until we know. 2. I think Ibaka was the best player in the deal, but probably won’t be worth what his next contract will pay him with his declining defensive skills. 3. The Magic would’ve been wise to trade Oladipo during the year or at some point because the (4-84) deal he struck with OKC is too much in my opinion.)

Signed Bismack Biyombo (4-68 feels about right, but I could argue center is so deep in the league they could’ve found many cheaper options last year or even now.)

Traded Serge Ibaka for Terrance Ross and first round pick (I like the deal, but like most Hennigan moves it treads water. Ross costs half as much as Oladipo and I think the pick this year [falling between 20-25 most likely] actually could hold more value than #11 last year because of a deeper draft. Basically it puts the Magic back were they were before the deal over the summer.)

I would’ve fired Hennigan last year after his second coaching hire flopped, but ownership gave him an offseason to swing for the fences after hitting singles and striking out for the course of his tenure. The only good news is the Magic aren’t crippled for the future by his moves.