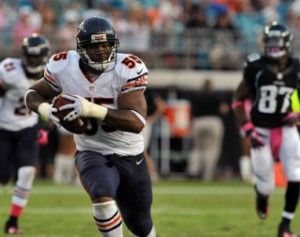 Charles Tillman and Lance Briggs have more touchdown catches than Calvin Johnson and as many as Larry Fitzgerald and Reggie Wayne.

Tillman and Briggs actually have two interception returns for touchdowns, and the Chicago Bears’ defense has been racking up points of late at a rate that would make any high-powered offense envious.

The defense has five touchdowns — all on interceptions in the past three weeks — and has allowed just five TDs by opposing offenses this season. Tillman and Briggs made history in Sunday’s 41-3 blowout at Jacksonville, becoming the first teammates to return interceptions for TDs in consecutive weeks.