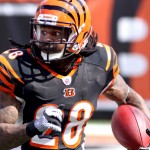 CINCINNATI (AP) — Bengals running back Bernard Scott will miss the rest of the season with an injured left knee.

Scott got hurt during a 17-13 loss to the Miami Dolphins on Sunday when the leg bent awkwardly as he was tackled. He later rode a stationary bicycle on the sideline, hoping to go back into the game.

Instead, he was examined for a torn ligament and didn’t return. The Bengals wouldn’t say what the exam found but did put him on injured reserve Monday, ending his season.

The reserve running back missed the preseason and the first two games with an injured right hand. He played in two games, getting eight carries for 35 yards.

The Bengals filled his spot by activating linebacker Dontay Moch, who was suspended the first four games for violating the NFL’s policy on performance-enhancing substances.