Tampa Bay Buccaneers are now 2-1 after beating the Denver Broncos on the road.  This was more than just a win; it was the Bucs showing off they are finally clicking on all sides of the ball, especially the defense.

Head Coach, Bruce Arians said his defense did “a heck of a job” on Sunday.

They continue to show off their speed and force, as they sacked Broncos Quarterback Jeff Driskel five times and intercepted him once.

The Broncos benched Driskel for backup Quarterback Brett Rypien in the fourth quarter.  In response, Bucs safety Mike Edwards snatched a pass out of the end zone on Rypien’s first drive for an interception.  Arians described Edwards as a “ball hawk”, saying “he should come up with plays like that.”

Rookie safety Antoine Winfield, Jr., from Minnesota is also making a big impact.  He recorded his second career sack on Sunday, wrangling Driskel to the ground in the first half.  Throughout the game Winfield showed off his versatility and speed, something GM Jason Licht reflected on during the draft in April saying, “he’s fast, he’s got great burst and acceleration and he’s a really good foot athlete.”

Arians echoed Winfield’s abilities on the field and has been impressed by him since he got to Tampa.  Arians said after the Broncos game, “he is a five-year vet mentally just because of where he came from, his maturity level is off the charts.”

Linebacker Shaq Barrett, who led the NFL with19.5 sacks last year, recorded two against the Broncos. He described the success today as a team effort, saying “everybody’s just working off each other; feeding off each other.”

Barrett recognized that they still have work to do including eliminating the long drives the defense gave up. However, overall, he said “we played well and I’m just happy we got the win because that’s the most important thing.”

The game ball went to Lineman Pat O’Connor who blocked the punt and recovered it on the first drive of the game.  The Bucs immediately turned that into a touchdown when Tom Brady thew to Chris Godwin on 3rd and goal.  Godwin, who missed week 2 due to a concussion, was taken out of the game with a hamstring injury.

On offense, the Bucs were able to spread out the plays with Brady connecting on 8 different receivers, including his go-to Mike Evans for 2 touchdowns.  Ronald Jones had 13 rushes for 52 yards, and Scotty Miller showed explosive plays with 3 catches for 87 yards.

Tight ends Rob Gronkowski and O.J. Howard completed several receptions each for 48 and 49 yards, respectively. Arians acknowledged that the Broncos are “one of those teams that was going to double team Mike [Evans] the entire game,” which opens up the field for the tight ends.  He said, “I really liked the way we improved in that area, getting those guys open and catching the ball.”

Gronkowski credited Brady’s ability to spread out the pass game, and said “it just felt good to get involved.” He believes the offense can continue to get better, explaining, “I feel like we can step it up with so many playmakers out there…I feel like we can be better as a whole, starting with myself.”

“I’ve got to actually give huge credit to the defense,” Gronkowski added, “they’ve been stepping up every week and just the way they stepped up today again was just unbelievable. They’re playing great.”

While there is inevitably still work to be done and improvements to be made by the team, they can head back to Tampa celebrating this victory.  The last time the Bucs beat the Broncos in Denver was 1993.

Week 3 also gave the Bucs the opportunity to finally play in front of an audience this year.  The Broncos allowed approximately 5,700 fans (7 percent of capacity) to attend the game.

*Videos used in this story came from the Tampa Bay Buccaneers’ Youtube Channel. Check it out here. 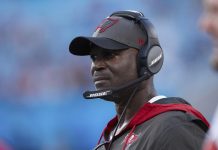 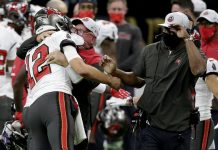