Noah Spence, the former Ohio State, defensive lineman, star who finished his football career at Eastern Kentucky, has found his NFL home. Spence went to the Tampa Bay Buccaneers with the No. 39 overall pick of the second round in the 2016 NFL draft.

Many draft experts feel Tampa Bay got a steal with perhaps the best pure pass-rusher in this draft class, Spence fell into the second round over risks associated with two failed drug tests that got him kicked out of Ohio State and banned from the Big Ten.

But after cleaning up his act he transferred to Eastern Kentucky last season and began his surge back up draft boards with a powerful performance at the Senior Bowl.

At Ohio State, Spence saw the field right away as a true freshman, accumulating 12 tackles and a sack as a rotation player in 2012. Spence’s big breakout came the following season when he ranked second in the Big Ten with eight sacks and sixth with 14.5 TFLs. 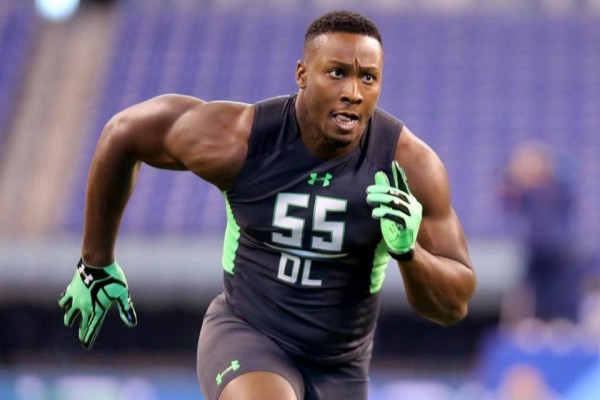 Spence ran into trouble later that season when he failed his first drug test for Ecstasy prior to the 2013 Big Ten championship game. He was slapped with a three-game suspension that stretched into his junior season, then tested positive for Ecstasy again that September and was banned by the Big Ten.

He transferred to FCS Eastern Kentucky and began his path to redemption with a renewed commitment to personal growth. He looked like the same terrorizing force as a redshirt junior for the Colonels as he was at Ohio State, and he was named an FCS All-American after recording 11.5 sacks and 22.5 TFLs.

Spence continued that momentum in the run-up to the Senior Bowl, this time with a validating performance against elite competition. His move up draft boards was slowed by a hamstring injury that lingered into the NFL combine, where he ran a 4.8 in the 40-yard dash and, some teams said, struggled in interviews.