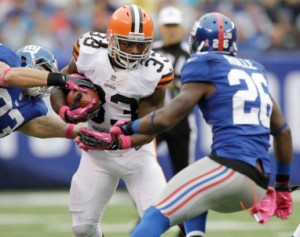 EAST RUTHERFORD, N.J. (AP) — Eli Manning has shown the New York Giants can score with anybody.

Take Sunday’s 41-27 win over the Cleveland Browns. The defense allowed touchdowns on the Browns’ first two series. Granted the first TD was set up by an Ahmad Bradshaw fumble at his own 22. But it only took two Trent Richardson runs to get the score

The second was a 65-yard pass play from Brandon Weeden to Josh Gordon, the fifth score of 29 yards or longer this season against New York (3-2).

That’s a no-no for any defense, particularly one with Tom Coughlin as coach.