In the National Football League’s stadium game, the focus will be shifting to Ohio as the Cincinnati Bengals and the Cleveland Browns ownerships have expiring lease deals and there will be three questions posed to local elected officials. Do you want to renovate our stadium? Or do you want to build us an entire new stadium? Or should we look elsewhere where a desperate set of local politicians wanting an NFL team will do whatever it takes financially to build a stadium? Politicians in Cincinnati and Cleveland have a guideline of sorts in negotiations with the Bengals and the Browns ownerships in the form of the recently completed state of Maryland, Baltimore Ravens ownership lease extension that commits Ravens ownership to remain in Baltimore through 2037.

Ravens ownership will not pay rent to use the Baltimore facility. But the Ravens ownership group will continue to pay operations and maintenance costs for the stadium. That tab was about $11 million in 2022. There will be some renovations at the facility which opened in 1998. The stadiums in Cincinnati and Cleveland opened within two years of the Baltimore stadiums. Maryland could spend as much as $600 million rebuilding the Ravens’ stadium. The Maryland Stadium Authority has been granted the authority to issue bonds to finance up to $1.2 billion worth of renovations for the football venue and at Oriole Park at Camden Yards, which houses Major League Baseball’s Baltimore Orioles baseball team. Ravens’ ownership will retain revenue from non-NFL events, such as concerts, college football games and exhibition soccer as part of the deal. Municipalities are spending a great deal of money for NFL facilities. New York will spend more than a billion dollars on a Buffalo Bills new stadium and Tennessee wants to open the wallet to keep the Titans in Nashville. Want a team? Pay up? 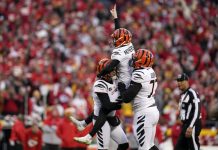