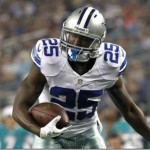 IRVING, Texas (AP) — The Dallas Cowboys have added rookie running back Lance Dunbar to their 53-man roster from the practice squad.

Dunbar was moved up Monday, when the Cowboys (2-2) returned to practice after their bye week. The speedy Dunbar could have a quick impact on kick returns.

Receiver Raymond Radway was signed to the practice squad. He was with the team in camp the last two years, but missed all of the 2011 season on injured reserve because of a broken leg.

Dunbar, the undrafted rookie from North Texas, ran for 105 yards with a 58-yard touchdown in the preseason finale against Miami.