The mayor of Dallas, Texas thinks his city should have a second National Football League franchise. A note to Mayor Eric Johnson, your city doesn’t have an NFL team right now, it once did but Clint Murchinson moved his Dallas Cowboys to Irving, Texas and now the team resides in Arlington, Texas. Nevertheless, Johnson took to twitter and said. “The answer is Dallas. Why? We are about to pass the Chicago metro and become the #3 metro in the US, which would make us the largest US metro WITHOUT 2 teams. Football is king here. Dallas needs an expansion team and we would be able to sustain 2 @NFL teams better than LA or NY. We need an AFC team that plays in Southern Dallas. It would never want for a fan base or attendance or support from the City of Dallas. Who wouldn’t want to see a Dallas versus Dallas Super Bowl…in the City of Dallas?”

Dallas at one time did have two pro teams, the NFL’s Cowboys and the American Football League’s Texas for three years, 1960, 1961 and 1962. Lamar Hunt took his Texans business to Kansas City in 1963. The National Football League is not expanding anytime soon and one question comes to the forefront. Does Dallas Cowboys owner Jerry Jones want a second team in the Dallas metroplex? Dallas does have two major league teams, the National Basketball Association Mavericks and the National Hockey League’s Stars. Major League Baseball’s Texas Rangers play home games in Arlington. Major League Soccer’s FC Dallas plays in Frisco. Johnson has a more immediate problem, Dallas’s arena is getting older and probably needs to be replaced sooner than later. Johnson has suggested that the owners of the Jacksonville Jaguars and the Los Angeles Chargers should consider Dallas or Arlington if Dallas cannot get an NFL expansion team. 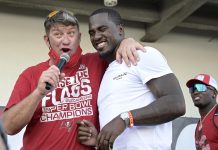