It’s hard to believe. When you think of the all-time great offenses in NFL history, the 2016 Falcons probably don’t register. The other thing that should be hitting you is: wait, what? None of the offenses that come to mind actually won a Super Bowl?

No, no they did not. Or they weren’t as potent as this group of Falcons. I think one thing that is startling is that Atlanta went 11-5. Only one other team in the top 30 of all-time scoring teams in NFL history had as many as 5 losses (2000 Rams went 10-6).

#1 on the all-time scoring list was the Manning-led Broncos that were massacred in the Super Bowl by Seattle’s top ranked defense. That team was 13-3. After that the list goes: 16-0 New England, 15-1 Green Bay, 15-1 Minnesota, 12-4 New England, 13-3 New Orleans, 14-2 Washington, and then a tie between the 2000 Rams and this year’s Falcons for 8th best. All those teams listed fell short of a title. Only 15 of the 35 highest scoring teams ever actually even made it to the Super Bowl including the Falcons. Amazingly, only 5, yes just 5 won the title.

Currently the highest scoring team in league history to win a Super Bowl is the 1999 St. Louis Rams, which rank 11th all-time. If you think of other great offenses, just know they actually scored less than Atlanta. Just look here.

Atlanta scored over 40 points five times this year. They scored under 20 just once, and under 30 just fives times. They have the league MVP playing for them at quarterback in Matt Ryan. So why doesn’t it feel right? 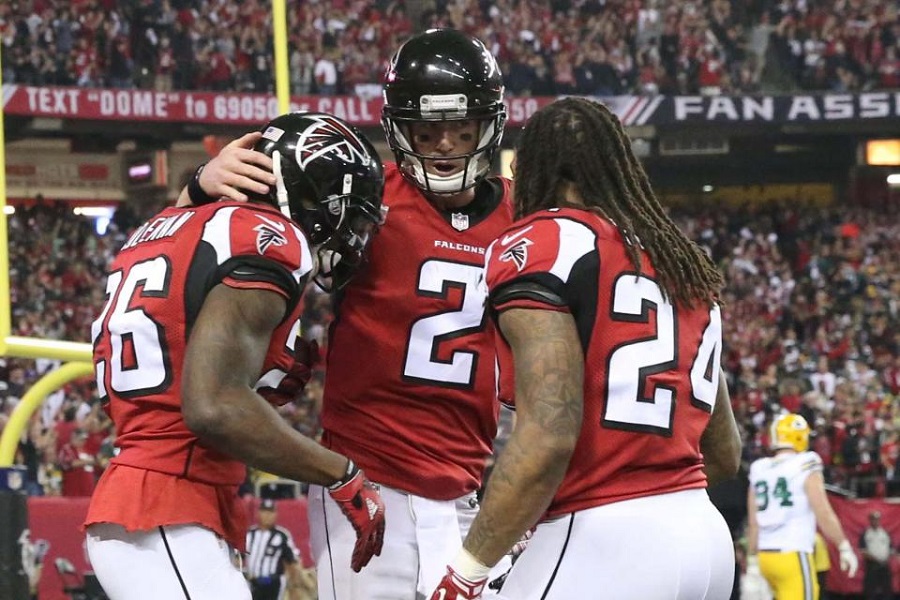 First, Atlanta came out of nowhere. They weren’t on anyone’s preseason radar for a team to watch or contend. Although they showed steady improvement from 4-12 to 6-10 to 8-8 over the three previous seasons, nobody saw this jump coming. Second, Matt Ryan struggled some the last few years after getting to the playoffs 4 of his first 5 seasons. He was kind of forgotten in the great quarterback discussion. Three, look at the names on the offense: Freeman, Coleman, Sanu, Gabriel, Toilolo, Hooper, Robinson, Hardy. None of these guys register the way the big names on the great offenses of all-time do. Julio Jones is incredible. And Ryan has been very good, but this isn’t a group of names like those other teams had with Hall of Famers, and Pro Bowlers lining up all over the field. And finally, like I mentioned, they weren’t a great regular season team. Remember their 11-5 was actually 7-5 at one point. Those other teams were established not just before the year in most cases, but during it as the team to beat. The Falcons had the 5th or 6th best betting odds to win the Super Bowl at the start of the postseason and as late as week 14 teams like Detroit, Denver, and Indy had better betting odds than them!

I’m not sure we’ll fully appreciate this team unless they win. And even if they win, they may have to follow it up next year with another great season, like those Rams did. They didn’t win the next two years, but they had 3 of the top 22 offenses ever, made the playoffs twice, and went to the Super Bowl once more. It’s why we recognize the Greatest Show on Turf: Kurt Warner, Marshall Faulk, Tory Holt, and Isaac Bruce for what they were. Success spread out over 3 seasons, not just one. Same with other units like Jim Kelly’s Bills, or Marino throwing the Marks Brothers in Miami, or anything with Jerry Rice.

Just a follow-up note on the all-time great stuff. Defense wins championships, right? It’s absolutely true. The top offense has faced the top defense in the Super Bowl 7 times previous, and the defense has come out on top 6 times, 4 of those results were blowouts. Here is the odd twist, going by points per game allowed, only the 2000 Ravens, tied for 8th, won the Super Bowl of the top ten ever. You’ll recognize plenty of the teams after that with 7 others ranked in the top 25 winning, but strange that none of the top 10 offenses or top 7 defenses ever won a Super Bowl, right?

This Falcons team can make history, but will do so without most noticing. Just like their run to the Super Bowl this season.