What is the Fantasy Football Value of Rookie Quarterbacks? 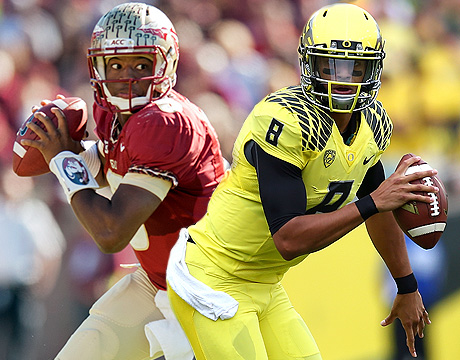 From 2012 to 2014, there have been seven quarterbacks selected in the first round of the NFL draft. Each signal caller showcased varying degrees of results in their rookie seasons. Some freshman passers like Andrew Luck and Robert Griffin III enjoyed tremendous success in 2012. Other first year players like Blake Bortles and Teddy Bridgewater showcased their promise in 2014 while also making a fair share of mistakes.

First round quarterbacks Brandon Weeden and E.J. Manuel experienced mediocrity in their inaugural seasons. The other extreme was Johnny Manziel for the Cleveland Browns last year. Unable to beat out journeyman Brian Hoyer for the starting quarterback job in training camp, the former Heisman Trophy winner barely got on the field last year. 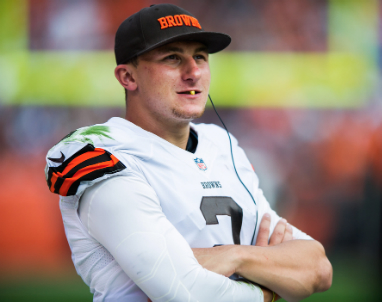 Taking all of these case studies into consideration, what type of fantasy football value can be gained by drafting one of this year’s first round quarterbacks in Jameis Winston or Marcus Mariota? Statistically speaking, the aforementioned seven first round rookie quarterbacks threw for an average of 2,705 yards and 13.3 touchdowns in their rookie seasons.

Barring unforeseen setbacks, most people believe that both Winston of the Tampa Bay Buccaneers and Mariota of the Tennessee Titans will start by week 1. Of the seven previous first round rookie quarterbacks chosen in the past three NFL drafts, only Luck, Griffin, and Weeden were their team’s opening day starters. That being said, Winston and Mariota will have ample opportunity to exceed the previous first round rookie quarterback averages of 2,705 yards and 13.3 touchdown passes.

If you end up choosing one of these rookie quarterbacks on your fantasy football team this year, how can you decide between Winston or Mariota? With Vincent Jackson, Mike Evans, and Austin Seferian-Jenkins at Winston’s disposal, I am of the opinion that the former Florida State superstar has a far better receiving core with which to work. Both Jackson and Evan eclipsed the 1,000 yard receiving plateau despite such dismal play from Tampa Bay’s quarterbacks last year. 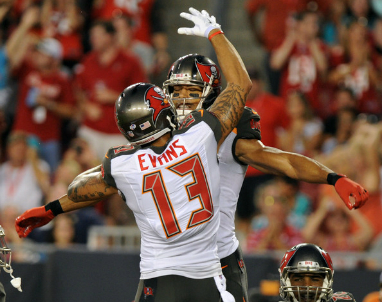 As for Tennessee’s pass catching targets, they simply do not stack up with Tampa Bay’s receivers in my opinion. Kendall Wright is a good, but not great option. Justin Hunter has been a complete bust. Finally, second round draft pick Dorial Green-Beckham has the potential to become either the next Randy Moss or the next Charles Rogers.

On the bright side for the Titans, tight end Delanie Walker enjoyed a breakout year last season with a career high and team leading 890 receiving yards. Unfortunately for Tennessee, Walker is on the wrong side of 30. While I think Winston will outperform Mariota in terms of passing numbers, Mariota’s scrambling ability is the great fantasy equalizer that can more than make up for a lackluster Titans’ passing attack which ranked 22nd in the NFL last year.

Mariota rushed for at least 715 yards in each of his three seasons at the University of Oregon. In addition, Mariota also rushed for 15 touchdowns in 2014, one more than his previous two seasons combined. By comparison, Winston accumulated just 284 yards and seven rushing scores in two years at Florida State. 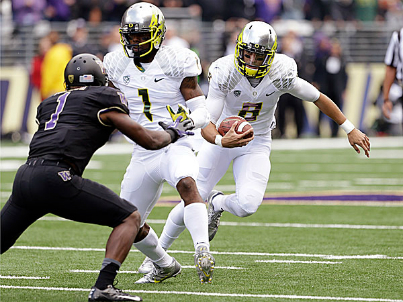 If we compute these rushing totals into fantasy football value with one point awarded for every ten yards and six points for every touchdown, Winston tallied 69 fantasy points during his collegiate career while Mariota racked up a whopping 397 fantasy points. I feel that Mariota’s sizable advantage as a scrambler should boost his fantasy value over the more pocket oriented game of Jameis Winston.

Granted, Mariota will not be able to run wild on NFL defenses the way he did in college. However, the rushing disparity between the two quarterbacks is too large to ignore. This is not to say that Mariota will end up being a better quarterback than Winston. Simply put, when gauging the fantasy value of these two passers in 2015, I think Mariota will have the edge provided he can post somewhat comparable passing numbers to Winston.