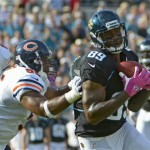 The Bears (4-1) scored 38 unanswered points, including 35 in the second half, to win their third consecutive game. The streak has everything to do with defense.

Chicago has returned five interceptions for touchdowns in the last three weeks.

Tillman and Briggs returned two of the team’s five interceptions for touchdowns in Monday night’s 34-18 victory at Dallas. Safety Major Wright returned one the previous week against St. Louis.

Tillman’s second interception return for a TD this season — a 36-yarder in the third quarter — was a history maker. It was the first time since 1950 that Chicago returned interceptions for touchdowns in three consecutive games.

The Jaguars (1-4) never recovered and played the final quarter amid a chorus of boos.