Jacksonville Puts The NFL On Notice, As The Jaguars Halts Seattle’s Comeback Bid: The Takeaway

Jacksonville, FL — Jacksonville came into the season with aspirations of improving on their 3-13 record from 2016 and becoming a respected team in the NFL.

Done. The Jaguars did not back down from Seattle, establishing themselves as the new bullies on the block, picking off Russell Wilson three times and dominating the time of possession.

In pivotal week 14 matchup with the Seahawks (8-5), Jacksonville (9-4) found themselves with an opportunity to make a statement. Up 30-24 with 2:23 left, the Jaguars stalled quarterback Russell Wilson’s 24th career fourth-quarter comeback. Seattle is one the NFL’s blueblood franchises, while Jacksonville is looking to change the guard and become relevant.

In front of Jacksonville’s first sellout home crowd since week one 2016, the Jaguars are in first place in the AFC South due to Tennessee’s loss to Arizona Sunday. With three weeks left, cant he Jags keep focus and take care of business, earning their first home playoff game since 1999?

Jacksonville sits in third place for the AFC Playoffs; they can get a one or two seed with some help. The Jaguars are looking for their first playoff berth in ten years.

The Jaguars have a favorable schedule over the next three weeks; they host the Texans (4-9) and Tom Savage next week at EverBank Field.

Most noteworthy, week 17’s matchup at the Tennessee Titans could be a de facto AFC South title game.

Coming off a great game last week vs. the Colts, Jags quarterback Blake Bortles had another great day with 268 yards passing, two touchdowns and no turnovers.

Bortles consistently attacked Seattle’s defense due to Jacksonville’s ability to run the ball effectively. Jags running back Leonard Fournette had 101 yards on 24 carries.

The passing game is the Jaguars weakness. Can Bortles continue his success over the past couple of weeks and provide enough production to make some noise in the playoffs?

“I felt as though I put our offense in a chance to score points,” Bortles said. “Obviously, not turning the ball over is a big part of that. There will be plays that were bad that we have to get corrected, but there were a lot of plays made out there by the wide receivers, running backs and the offensive line that were pretty awesome.”

Part of the passing game woes for Jacksonville is the receiving corps. Top receiver Allen Robinson went down in week one with a knee injury. Marquis Lee has been banged up and leads the NFL in dropped passes. And Allen Hurns is out with an ankle injury.

Jacksonville needed some of their rookie receivers to step up and start shouldering some of the load. They broke out against Seattle’s vaunted defense.

Jacksonville receiver Dede Westbrook had five catches for 81 yards and touchdown; Keelan Cole changed the dynamic of the game with his 75-yard catch and run.

The Jaguars will need more production from these two as they build continuity with Bortles going into the playoffs. 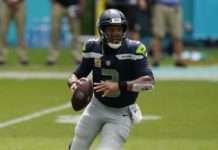