Kansas City, MO — Every year, each team in the NFL plays a game to prove their status. Whether its to get to the top, stay at the top, or prove they belong with the elite. Last year for the Jags there were several; Jacksonville (3-1) moved to the top and declared they belong with wins over Baltimore, Pittsburgh, and Pittsburgh again in the playoffs.

This year, the Jags have already beaten the New England Patriots; now they look forward to duking it out with the hottest team in the NFL, the Kansas City Chiefs (4-0).

The Chiefs look to prove they belong amongst the elite as the number one defense comes to Arrowhead Stadium. Head coach Andy Reid turned heads when he booted quarterback Alex Smith in favor of Patrick Mahomes after his best season as a pro. It turns out, Reid knows best.

“Right now, he is playing better than any quarterback has ever played. He is an MVP quarterback,” Jacksonville head coach Doug Marrone said of Mahomes. “The question is what he can’t do. I don’t know. I don’t think words can really put in perspective how great he is playing. That is really all there is to it. He gives you challenges every which way whether you put him in the pocket (or not). He can make every throw.”

Sunday’s heavyweight matchup will be crucial down the stretch for playoff seeding. Already with a win over New England, the Jags look to secure another victory against a playoff contender.

In last week’s Monday night game, the Chiefs faced adversity for the first time of the season against a good Denver defense. Kansas City got down early and needed a game-winning drive by Mahomes. Mahomes’ escape-ability was crucial during the game; he’ll need more of that facing the Jags’ defensive line.

Jacksonville isn’t getting to the quarterback as often as they did last year with only ten sacks. The Jags had 17 sacks going into week five last year during the berth of Sacksonville.

Also, tight end Travis Kelce is the defacto best tight end in the NFL due to the injury history of Rob Gronkowski. Kelce has five catches over 20 yards to go with three touchdowns on the young season.

Jacksonville’s secondary must figure out a way to slow down the outside weapons of Kansas City.

“For us, they have a ton of talent over there, but we’ve got to utilize our offense and our weapons and try to do what we can to attack them,” Mahomes said.

Everyone knows Tyreek Hill is electric, Kelce will line up outside as well, but don’t forget about Sammy Watkins whom everyone thought would be Tyreek Hill.

Jalen Ramsey and company must bring a heightened sense of awareness to Arrowhead Stadium as the Chiefs use misdirection, and play action on every other play.

Look for Jacksonville to be the more physical team. They may need to uncharacteristically bring pressure if they cannot get to Mahomes with the front four.

As great as KC’s offense is, they have the worst defense in the NFL allowing 451.8 yards per game. Most noteworthy, their pass defense gives up 328.5 yards per game. Also, the Chiefs are in the bottom quartile in scoring defense (28.8 pts/game) and run defense (123.3 yds/game).

It’s up to quarterback Blake Bortles and offensive coordinator Nathaniel Hackett to find favorable matchups and exploits Kansas City on the road.

With Leonard Fournette out again, running back T.J. Yeldon gets the call. Yeldon leads the Jags in rushing thus far (205 yards) due to Fournette’s uncooperating hamstring.

After leading the league in rushing in 2017, Jacksonville is ranked 12th four games in. Look to the Jags to establish the run game early to quiet a raucous crowd, and keep the Chiefs’ offense off the field.

Bortles is coming off a career-high 388 yards last week vs. the Jets. The fifth-year quarterback must be salivating at the chance to attack the Chiefs’ defense, proving his detractors wrong.

Jacksonville has done a great job spreading the ball around as five players have 18 targets or more. Receiver Dede Westbrook is leading the team in targets, receptions, and yards. The Bortles-Westbrook connection will be on full display especially in crucial situations.

X-Factor: The most critical factor in Sunday’s matchup will be third down. As bad as Kansas City’s defense is, they lead the league in third-down defense (23.8%). Jacksonville must convert third downs and stay on the field to pull the upset on the road.

Click here for college football previews around the state of Florida. 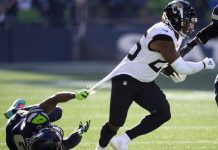 Jaguars looking to make it two in a row as they are on the road to face the Colts.