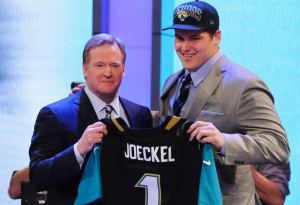 ST. LOUIS — The Jacksonville Jaguars have lost two left tackles in less than a week.

Rookie Luke Joeckel suffered a right high ankle fracture during the first quarter of Sunday’s 34-20 loss to the St. Louis Rams and will miss the remainder of the season.

The injury occurred six days after Eugene Monroe was traded to Baltimore for fourth- and fifth-round draft picks.

“It wasn’t pretty,” said Jaguars quarterback Blaine Gabbert, who left the game in the third quarter with a hamstring injury. “That’s tough. My heart goes out to him because he was playing well and he was eager to get in at left tackle. That’s the rough part about this game. It is a physical sport and injuries like that do happen.”