TAMPA – The Sunshine Boys, Joe Henderson, Ira Kaufman and Jim Williams break down this weeks key games in the NFL. As always on the Sunshine Boys podcast they look at the Florida teams first and they talk about the importance for both the Bucs and the Dolphins to finish this week with a 2-3 record rather than 1-4.

The Boys are quick to stop any talk about the Bucs quarterback Jameis Winston. The second year starter is doing fine but needs more help that may be on the Tampa Bay roster. Meanwhile, the Dolphins might just face a must win game this week against the Titans, if they have any playoff hopes.

Will both teams get wins this week?

Well listen and find out.

While you are listening here are a few notes to review.

Here are some fast facts –

The Dolphins quarterback, Ryan Tannehill was sacked five times in the Dolphins’ 22-7 setback to Cincinnati on Sept. 29 and faces a Tennessee contingent that blitzes on an NFL sixth-best 33 percent of opposing snaps.

“It was one of the worst performances I’ve seen from our offense in a long time,” said Tannehill, who wouldn’t mind a repeat of his last showing versus the Titans when he threw for two touchdowns in a 38-10 romp last year.

This might be as close to a must-win game for the Fish as it comes. So, it might be now or never for Tannehill, who has to step up and start making plays. 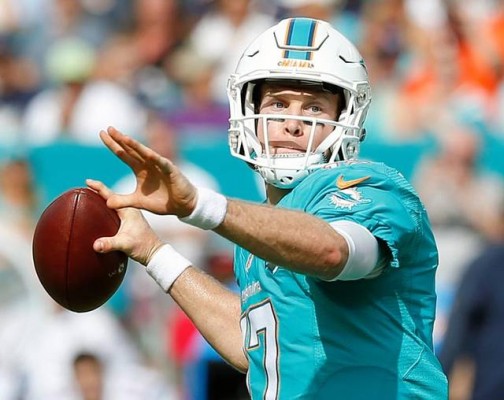 Meanwhile, Miami’s fourth-worst rushing attack is going nowhere fast, Tennessee’s DeMarco Murray paces the NFL’s fourth-best ground game with 340 yards on 5.2 yards per carry. The sixth-year back rushed for 95 yards and two touchdowns on Sunday in the Titans’ 27-20 setback to the AFC South rival Houston Texans.

Miami has been slow out of the blocks this season, getting outscored 59-23 in the first half and has trailed at intermission in each of its four games. Tennessee LB Brian Orakpo has four sacks in his last three contests and lastly, the Dolphins’ 26.7-percent success rate on third-down conversions is the worst in the league.

The Titans just fired their special teams coach on Monday, which is a recipe for struggling come Sunday, and Mike Mularkey has turned the Titans into an offense so boring that Nashville fans are longing for the days of Mr. Personality – Jeff Fisher.

We know that second year quarterback Jameis Winston has suffered not because of a lack of his own talent, rather the lack talent around him. No running game Doug Martin, lost to injury, no deep passing threat at the receiver spot and an offensive line that is subpar.

The defense is not much better, as Tampa Bay ranks 31st in points allowed, but has held opponents to an average of 3.3 yards per carry. The main problem has been the lack of turnovers as the Bucs enter minus-9 in that department.

Carolina desperately wants to get its power ground game back untracked as the passing game is clearly not ready to shoulder the load. We know that Newton won’t be behind center Monday night but backup quarterback Derek Anderson is plenty familiar with Tampa Bay. Back in 2014 he was at the helm of a pair of Panthers wins.

It is worthy of note that Carolina has their own issues with a less than spectacular running game with Jonathan Stewart also missing the past two games due to a hamstring injury. With his status highly uncertain, Cameron Artis-Payne and Fozzy Whittaker would again combine to replace Stewart.

So, the goal for the Bucs might be to stop the run and force Carolina to beat them through the air.

Listen to the Sunshine Boys and they will tell you how this story will end.