For those who miss the news of the world, Jacksonville Jaguars owner Shahid Khan’s bid to take over London’s Wembley Stadium was reviewed by the English Football Association this week. No decision was made on Khan’s overture. Khan is willing to spend about $800 million to take over the facility. That offer has caused people to wonder whether Khan’s Jaguars franchise might be the one that the National Football League could relocate to London, England as there seems to be some sort of plan to put a franchise in the city. The NFL is not expanding so moving a team would be the only option.  But there is a long-term lease issue in Jacksonville. Khan’s business is tied up in the city until 2030. Khan can buy his way out of the lease.

Khan’s Jaguars NFL team will play the Philadelphia Eagles on October 28 at Wembley. Khan isn’t trying to take over Wembley because of his NFL team. He also owns an English Premiership club in London, Fulham. Khan claims that there is no plan to move his team to London and is satisfied playing one game a year in London. Meanwhile in London, the English Football Association is scrutinizing Khan’s Wembley proposal. There is some doubt that the group really wants to sell the stadium to Khan or anyone else. Jacksonville has been a problem franchise nearly since the beginning of the process of granting expansion teams when the NFL decided to add a 29th and a 30th franchise in the early 1990s. Jacksonville’s original proposed ownership group that included Jeb Bush and it had some financial problems and there was also a problem of getting stadium finance together to raze the Gator Bowl and rebuild the facility. That was straightened out but the market has not been all that successful by NFL standards. Khan claims he is not moving but this is London calling. 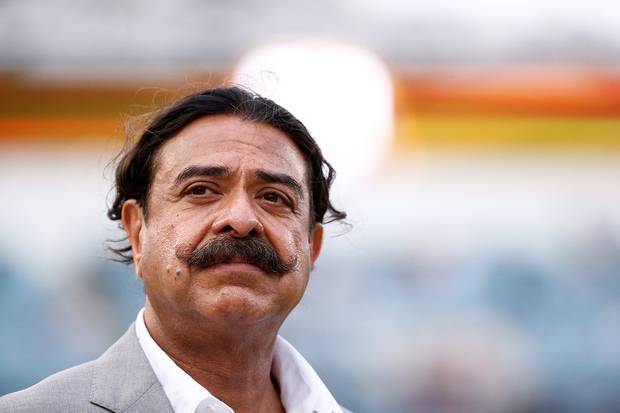 Shahid Khan is trying to get control of Wembley Stadium.