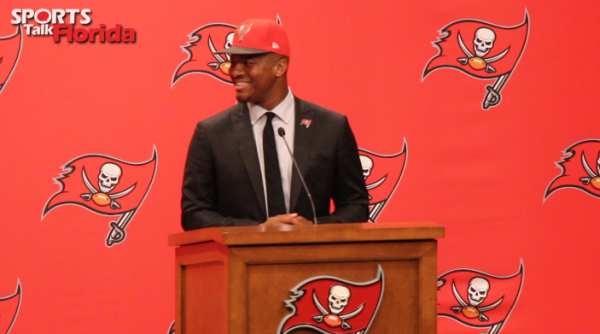 I hear you haters. It’s hard to escape the irrepressible din that collectively comes out of your mouths. I get it, you hate Jameis Winston. I get you’re convinced that the Buccaneers front office has singlehandedly destroyed the franchise for years to come if not forever. Heck, if most of you had your way they would shut down One Buc Place tomorrow and turn it into the world’s largest landfill filled to the brim with your still smoldering Buccaneers gear.

You’re never watching another game, you’re never raising the flag again, and you’re melting down all your pewter and buying some Disney On Ice tickets.

You’re full of it.

Here’s exactly how it’s going to go down with you guys.

First, you’re going to complain and moan, come up with conspiracy theories, blame the court systems, write your senators, yell at your dog, and then probably kick a tree or two. Or, even more likely, you’ll just end up being an insufferable tool on social media day in and day out until you’re red in the face and have unfriended and unfollowed everyone on the planet.

Then, after every last person on the planet is ready to ship you to Saturn, August 15th will roll around. You might not even realize it at first, it being a Saturday morning and all. You’ll get up, maybe have a little yard work to do, and then at some point it will hit you.

“We play the Vikes tonight.”

Suddenly, that “World’s Greatest (insert gender role here)” shirt doesn’t seem to look so appealing anymore. You’ll casually head to the closet, and before you know it you’re weed whacking in a vintage orange and white throwback topped off with that sweet sideline hat you picked up last year. Soon after, you’re checking on the beer supply while nonchalantly assessing the freezer for potential victims of your big bright gas grilling machine. You make a few phone calls, touch base with some friends, and before you know it you’re planted right back in your GM chair stuffing your face with burgers and beer like that hot dog eating guy from Japan.

Minutes later the ball is kicked, the game begins, and Buccaneers hit the field on offense. You freeze momentarily as Winston drops back and then lays one out to Vincent Jackson and his two yards of separation. You hold your breath, stand up, and let out a fierce roar as Jackson hauls it in for a long touchdown.

Your living room instantly becomes a pile of sweaty hugs and high fives as your vintage throwback gets soaked through by your exploding king can of Coors Light. You sit back down, smile on your face, and relish in the start of the NFL season. You look at your friends who are too shocked to speak, and stand up pointing to make your case one last definitive final time to the masses.

“I told you guys he was good!”