Not every President of the United States leaves a sports legacy. But John F. Kennedy, who was assassinated on November 22, 1963, did leave one permanent impression on the sports world. He created a massive revenue stream for sports owners from television by signing The Sports Broadcast Act of 1961. Kennedy though was not responsible for the actual legislation. A Brooklyn Congressman Emanuel Cellar wrote the bill but gets no credit these days for changing the sports landscape in the United States. The Cellar Bill allowed the National Football League to market its broadcast rights as a league package, evenly spreading the broadcasting revenues among the franchises and guaranteeing each team substantial annual revenues. The act would also apply to the National Basketball Association, the National Hockey League and other sports. Major League Baseball had an antitrust exemption and did not need the federal law as the American and National Leagues could sell the product, baseball, as one to TV networks. The NFL wanted the same protection and wanted to co-opt the American Football League’s idea of selling all the teams as one to networks. The AFL flew under the radar as did the NBA and NHL in those days.

In 1961, NFL Commissioner Pete Rozelle cut a two-year, $9.1 million deal with CBS.  The NFL submitted the deal before Federal Judge Alan K. Grim in Philadelphia to make certain it was legal. In July, Judge Grim decided the NFL-CBS deal violated antitrust laws. Rozelle went to Cellar, the Chairman of the House Judiciary Committee’s Subcommittee on Anti-Trust and Monopoly, looking for help. Cellar got a bill through the House. A similar bill was introduced in the Senate by Estes Kefauver who pushed it through. Kennedy signed the Sports Broadcast Act of 1961 into law on September 30th leaving a lasting impact. 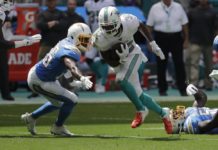