Historians and people who lived during the Kennedy Assassination 53 years ago today are spending the day reflecting on the brief presidency of John F. Kennedy. Among the topics that might be discussed include The Bay of Pigs/Cuba policy, Kennedy’s fiscal policies which included income tax cuts, the race to the moon with the Russians, the Cuban Missile Crisis and the impact on Turkey, JFK’s Vietnam involvement, the seemingly laissez-faire civil rights policy which was tested in Mississippi and other places and how JFK changed the National Football League.

Just how did John F. Kennedy change the National Football League and in a sense sports in the United States? The answer is simple. He signed legislation that violated the Sherman Antitrust Law and gave leagues like the National Football League, the National Basketball Association, the National Hockey League along with college sports the ability to bundle league or conference teams into one business package and sell that package to TV networks. John Kennedy got a lot of help changing the NFL from Congress and perhaps shouldn’t get very much credit for what eventually became the NFL.It should be noted that September 30, 1961 ought to be celebrated as Emanuel Cellar Day around the NFL with NFL owners and players should be remembering the life of one of the 20 most important people in NFL history. Wait a second, when did Emanuel Cellar play football? Did Emanuel Cellar coach a team? Did Cellar own a franchise? Was he a Commissioner?

The answer to all of those questions is no. Congressman Cellar authored legislation that would give the NFL tremendous clout with growing television networks: the Sports Broadcast Act of 1961. That summer, both the House and Senate passed Cellar’s legislation, and the Act was signed into law by President John F. Kennedy on September 30, 1961. The Cellar Bill allowed the NFL to market its broadcast rights as a league package, evenly spreading the broadcasting revenues among the franchises and guaranteeing each team substantial annual revenues. 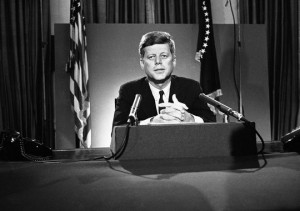