The team charges more for ducats than any other NFL team.

Sometimes, saying less is a far better alternative than streaming your thoughts. Take the National Football League’s Las Vegas Raiders owner Mark Davis who happens to have a controlling stake in the team by virtue of being the son of the late Al Davis. Mark Davis is of the opinion that Raiders tickets “are not priced high enough,” because according to Davis, Raiders home tickets are the “most expensive on the secondary ticket market in the NFL.” Davis said “we probably underprice our tickets. A lot of fans are under the misconception that the Raiders set the secondary market price. That’s not true. That’s market-driven.” Davis’s Raiders generated $119 million in ticket revenue in 2021 more than any other NFL team.

Davis’s business is in Las Vegas not Oakland because in 2016, his Raiders business received the largest stadium subsidy in American history, $750 million. That allowed Davis’s Raiders to leave the Oakland Coliseum and relocate to Nevada in 2020. The deal appears to have been great for Davis but not all that good for Las Vegas and Clark County, Nevada. The theory was that Clark County would raise money to pay off its football stadium debt by selling bonds which would be paid back by taxes levied on hotel rooms. In other words, out of towners but the COVID-19 pandemic began in March 2020 and the hotel rooms were empty for a while.  Clark County has had to pay more than $20 million of stadium debt from a county reserve fund. Davis’s Raiders business has the most expensive average ticket price of any NFL team at $153.47, according to Team Marketing Report. If there is one piece of good news for Raiders ticket buyers, Davis does not use dynamic ticket pricing. It’s the same price for every game. 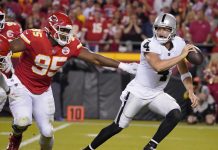 NFL Saturday: Chiefs would be top seed in AFC with win over Raiders